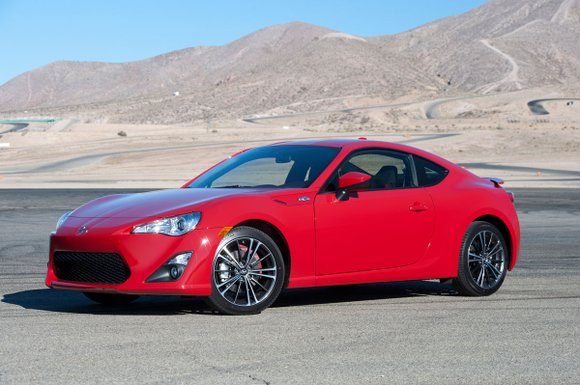 Scion suffers from a malady that has affected a number of brands that are the smaller offshoots of major automotive powerhouses. As the designated youth brand of Toyota it is not clear whether Scion has established an independent presence in the market even though it has some top notch products.

Scion’s halo car is the FR-S. On sale for a couple of years, the 2+2 coupe has not done what it was intended to do; generate aspirational intent for the brand. That was apparent during our week-long test drive. A lot of people asked what the car was; a tribute to its slick styling, but nobody knew that the FR-S was a Scion.

That’s the quandary of the Scion FR-S. It is a great car but it is a low volume vehicle. So how big of a marketing budget does Scion allocate to boost its presence in the market?

While Scion ponders that question, the driving public is not all that aware of a contemporary traditional sports car that is right under its collective noses. Scion has been on sale since the 2013 model year.

Although it is a 2+2 coupe, the car is a really a two-seat sports car. There’s not enough space for small children in the back seats, although there are latches for child seats. The rear seats are buckets but the back of the seat is a bench. It will fold down creating a decent sized cargo space.

We don’t think anybody is going to pay much attention to the back seats. The story of the 2015 Scion FR-S is under its long bonnet or hood.

The car had a 2.0-liter, four-cylinder boxer (flat) engine that made 200 horsepower and 151 pound-feet of torque. It was mated to a six-speed automatic transmission with paddle shifters. A six-speed manual gear box is available.

One quibble about the powertrain is that maximum torque should be reached at a lower RPM rather than the listed 6,400 rpms. That would provide even more oomph. But don’t get it twisted; though lacking the brutishness of cars with far more horsepower and torque, the 2015 Scion FR-S was quick and nimble.

The car was a throwback to heralded sports cars, mostly British that were lightweight and agile. Our FR-S with weighed a little more than 2,800 lbs. and for this model year its handling had been enhanced.

It had a more rigid front suspension, retuned rear shock absorbers and improved damping. Scion said that the changes resulted in less body roll and they did. Taking curves, mostly expressway entrances and exits, aggressively, the FR-S stayed flat with no tire squeal. There were no dips at the corners. On flat surfaces the car rode smooth, and the driver felt only the most pronounced bumps in the road.

We’re not a fan of paddle shifters or automatic manual transmissions. But with what Scion called dynamic rev management technology, the setup on the FR-S was smooth flowing, easy to initiate and it conveyed that the driver had more control of the car.


The FR-S had a low center of gravity, a long hood and short rump. It had an aggressive front bumper and angular headlights. The rear dual baffled exhausts were larger and they were flush with the rear bumper. The rear fascia was low and wide while the tail lights were sharply angled. The car had a distinctive style that was menacing and it looked fast.

With a no-nonsense interior, the FR-S was about driving. It had deep bucket seats, a leather-wrapped steering wheel, large gear shift knob and a large center mounted tachometer. We monitored our speed with a large digital readout that supplemented the analogue gauge.

Our interior was black, upholstered and it featured red accent stitching and aluminum pedals and scuff plates. There were creature comforts. The test vehicle had a touch screen, Bluetooth, audio streaming connectivity, an HD radio and auxiliary and USB jacks. There were voice controls as well as a navigation system. The premium audio system featured 300 watts and eight speakers.