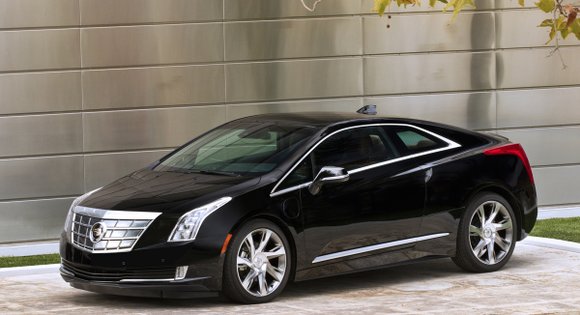 As we started writing this review there was a 2014 Cadillac ELR 2+2 coupe sitting in the driveway connected to the house. When the ELR was delivered, we were advised that its lithium ion battery had half of its full charge; that information immediately caused range anxiety but there was no need.

Still, once the charge was depleted, we plugged the car into a 120 Volt outlet to get the full effect of the powertrain. The Cadillac ELR is a plug-in hybrid. Cadillac boasts that it is the only extended range electric vehicle offered by a full-line luxury automotive brand. That is true but it is too bad that a more definitive name can’t be used, although we can’t come up with a better alternative.

The way it worked was simple; it was state of the art propulsion for an automobile. The ELR had two electric motors: the larger one generated from 157 to 181 horsepower to turn the front wheels while the second electric motor made 55 kW of generating power to run accessories.

There was a 1.4-liter cast iron four cylinder engine with aluminum cylinder heads. This is really important; this engine did not power the ELR’s wheels. It was configured to be an electric generator and the power it made was fed to the lithium ion battery from which the electric motor got its oomph.

In other words, the Cadillac ELR is an electric car with a storage battery that can be recharged externally or internally. Fully charged, the battery can propel the ELR in electric vehicle mode for 36 miles which isn’t that far. But coupled with the range extending four-cylinder gasoline engine generator and the ELR had a range of 340 miles.

Automakers add every option they have to a hybrid to help defray the cost of the technology. It is no different with a plug-in hybrid. The sticker on our test vehicle was $76,990. The only option was the $995 dollar red tint coat paint job. For that money, buyers will get everything that Cadillac has to offer on the ELR.

But first its design was out of this world. It had Cadillac’s now signature vertical headlights and taillights, sharp body lines of edge design, 20-inch wheels pushed to the corners and a flush front fascia and grille to facilitate air flow and reduce drag. The ELR also had hidden door handles and a charging port on the right front fender. You’ll know it’s a Cadillac when you see one but you will also know it’s a Cadillac like none you’ve seen before.

Lights on the side view mirror pulse green when the car is charging and go out when charging is complete. That light didn’t pulse while we charged our test car but it did glow green. Since we used a 110 volt socket, it would have taken 12 to 18 hours to completely charge the ELR. With a 220 volt outlet, we could have fully charged the car in 5 hours.

Because of its electric motor this car was almost silent. The gasoline powered generator was only 1.4 liters with a maximum engine speed of 4,800 rpm, thus, it was almost as quiet as the electric motor. The two worked in tandem seamlessly. The car had regenerative brakes and stop and go technology.

The Cadillac ELR had a top speed of 106 mph that we never neared. It had a zero to 60 mph time of 7.8 seconds in range extended mode; add one second when it is in electric mode. We didn’t try either one of those.

Quite frankly, the Cadillac ELR was not a sports car, we don’t know if it qualifies as a luxury performance sedan either. But it was a luxury experience in every sense of the concept. The electric gas generator propulsion system moved the two-ton coupe effortlessly.

With an electric motor, only two gears were needed: backwards and forwards. That contributed to the smooth cloud like ride as well as the near silence. The suspension compression was a little rigid at times but it wasn’t harsh.

The car was chock full of equipment. There were four drive modes: sport, tour, mountain and hold. The later would reserve the battery charge for later use relying on the gasoline powered electric generator.

Driver and passengers are swathed in all that technology by leather, carbon fiber, suede micro-fiber and wood trim. There was royal blue ambient lighting (it could have been a little brighter) and a power assisted storage cup holder in the center console.

There was the Cadillac User Experience system or CUE that can be so confounding it came with an onboard tutoring program. The car had an eight-inch configurable TFT screen that was one of the slickest we’ve encountered.

A charging schedule could be programmed into the car. It also had a safety alert seat, forward collision alert, lane departure warning and adaptive cruise control. It had a rearview camera, park assist and blind side alert with cross traffic alert.

There is a line from a film that says no expense was spared. And indeed that can be said when it comes to the 2014 Cadillac ELR.