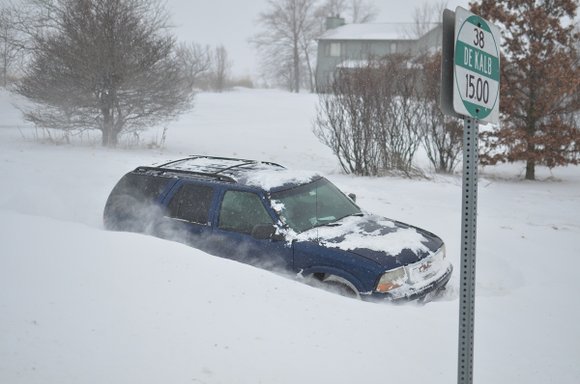 The harsh winter we are having shouldn't be viewed as a refutation of global warming, but rather as further evidence of a growing problem. Pictured: Trying to get around in Cortland, Illinois on January 4, 2014. Michael Kappel, courtesy Flickr

Dear EarthTalk: Does the fact that we’ve had such a cold and snowy winter mean that global warming might not be such a big problem after all?

It’s tempting to think that the cold air and snow outside augur the end of global warming, but don’t rejoice yet. According to the Union of Concerned Scientists (UCS), weather and climate are two very different beasts: “Weather is what’s happening outside the door right now; today a snowstorm or a thunderstorm is approaching. Climate, on the other hand, is the pattern of weather measured over decades.”

Isolated weather events and even seasonal trends are not an indication of global warming’s existence one way or another, and most climatologists agree that the carbon pollution we have been spewing into the atmosphere for the past century is leading to more frequent and intense storms of every kind and causing greater temperature swings all around the planet. In short, the harsh winter we are having shouldn’t be viewed as a refutation of global warming, but rather as further evidence of a growing problem.

“There is a clear long-term global warming trend, while each individual year does not always show a temperature increase relative to the previous year, and some years show greater changes than others,” reports the National Oceanic and Atmospheric Administration (NOAA). The agency chalks up these year-to-year fluctuations to natural processes such as El Niño or volcanic eruptions, but points out that, regardless, the 20 warmest years on record have occurred since 1981, while the 10 warmest were in the past 12 years. And global average temperatures have risen by 1.4°F overall since the early 20th century.

According to Becky Oskin of LiveScience.com, shrinking polar ice caps as a result of global warming in recent decades are one factor that may be contributing to the cold weather in North America this winter. “One way the shrinking ice changes weather is by pushing winter air south,” she reports. “When the stored ocean heat gradually escapes in autumn, it changes the pattern of an atmospheric wind called the polar vortex, streaming frigid Arctic air into North America and Europe.” Meanwhile, a 2012 study by researchers Jennifer Francis and Stephen Vavrus concluded that intense warming in the Arctic has caused changes to the jet stream that regulates air circulation around the planet, potentially leading to stronger winter storms hitting the eastern seaboard of the U.S.

And Oskin points out that while we may be bundling up and shoveling out in the U.S., it’s turned into another scorcher of a summer in the Southern Hemisphere: 2013 was Australia’s hottest year on record, and 2014 has started off even hotter, with temperatures soaring to 125°F and severe fire warnings issued in at least two states there. Apparently global warming is still on.

EarthTalk® is written and edited by Roddy Scheer and Doug Moss Send questions to: earthtalk@emagazine.com.