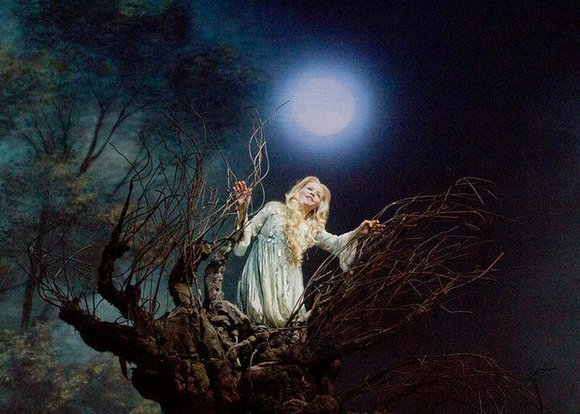 NEW YORK - Anyone who didn't know who Renee Fleming was before her singing of the Star Bangled Banner before millions in a worldwide television audience before Super Bowl XLVIII, certainly knows who she is now.

If they attended the Met Live HD transmission of the opera 'Rusalka' in movie theaters around the globe, they would have seen her in action at her 'day job' at the Metropolitan Opera, in one of the signature roles of her career.

In a fashion that ironically mimics the beginning of many football star's careers, Renee Fleming burst onto the opera scene twenty-five years ago after catching the attention of opera scouts at the Met's National Council Auditions.

She has since sung the role at the Met more than any other singer in Met history. Sitting in the darkened theater at the AMC Empire 25 in Times Square, it was easy to see why.

Renee Fleming is Rusalka, in all of her mystical, nymph-like glory, with an ethereal voice that has even become more alluring over time.

Conductor Yannick Nezet-Seguin leads an all-star cast, including Polish tenor Piotr Beczala as the strikingly handsome Prince. His command of the linguistically difficult Czech text wrestles this somewhat forward, abrasive sounding language to sheer lyrical poetry with his strong, yet

Dolora Zajick, as the deliciously evil witch Jezibaba, sends her powerhouse voice vaulting to the rafters, at times matching reverb for reverb the booming sounds of car crashes and explosions leaking over from the SciFi action film RoboCop showing in the movie theater next door.

Met favorite John Relyea gives a forceful, tongue-in-cheek performance as the Water Gnome and New York native Emily Magee acquits herself well in her Met debut as the Foreign Princess. It's almost worth seeing this production twice, if only to hear Fleming sing Dvorak's "Song to the Moon" in the opening act.