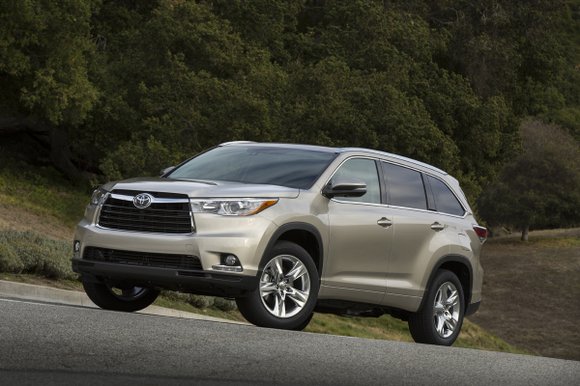 This all new rendition of the Highlander is the third generation and the vehicle has done well for Toyota. It sold 129,000 units in 2013. What’s more, it has a 40 percent customer retention rate.

But Toyota wants more buyers; in order to do that, it must conquest. After holding focus groups with current owners, the Japanese automaker embarked on a development program to make the Highlander better in three areas: styling, families and driving dynamics.

The new Highlander looked much better. It was lower and that made it appear longer, leaner and sleeker.

The hood merges with a redesigned trapezoidal grille and wrap around headlights that run into bolder fenders gave the new Highlander a far more aggressive appearance than the vehicle that it replaces.

Toyota has always been top notch when it comes to the fit and finish of its interiors. But this time the company outdid itself. The instruments, the information screens and the control buttons and knobs of the 2014 Highlander fit together so well that the entire dash looked as though it had been carved from one piece. And lettering on the controls was large and clear to the viewer to boot.

The dash and doors had soft touch points, the leather was tactile pleasing and there were understated touches of chrome. The seats were redesigned and they provided lots of lower back support in both the first and second row.

Because the rear suspension has been switched to a double wishbone there were no tower struts taking up space in the rear which allowed Toyota to give the Highlander a wider third row. The automaker says the Highlander can now carry eight passengers. Still, the three people sitting in the third row will have to be of the child variety.

The second row can be equipped with either bench seat to sit three abreast or captains’ seats. The second row is also a one-step slide forward affair for easier access to the third row which was a 60-40 split seat that aids storage flexibility. What’s more, the rear cargo space behind the third row has increased by 34 percent.

That rear wishbone suspension also gave the 2014 Highlander a smoother ride and better handling. The test route featured historical locations, thus, it was comprised of everyday driving. The vehicle was really quiet and it handled well. Acoustic front glass, better sealers and a retuned exhaust all contributed to a pleasantly ambient experience inside the vehicle.

Both engines are mated to six speed automatic transmissions and both cone in all-wheel-drive or front-wheel-drive models. There is also a hybrid Highlander. It pairs the 3.5-liter V6 with a high-torque electric drive motor-generator. Net horsepower is 280; with a fuel rating of 27 mpg city/28mpg highway/28 mpg combined, that’s the best fuel mileage of the three engine choices.

It seemed like an unending list of creature comforts. The 2014 Toyota Highlander had stability control, traction control, electronic brake force distribution, brake assist, anti-lock brakes and smart stop (it will stop itself).

There was also a backup camera and Hill-start Assist Control. All AWD gas models will have an AWD lock switch too. The three row crossover from Toyota can also be equipped with rear parking sonar, blind spot alert with cross traffic alert, lane departure warning and automatic high beam headlights as well as a pre-collision system and adaptive cruise control.

The usual suspects included Bluetooth, a navigation system; and satellite radio and on it went. Prices start at $29,275 for an LE four-cylinder FWD Highlander to 44,450 for a Limited AWD Highlander with the Platinum Package. The Highlander Hybrid starts at $48,160.