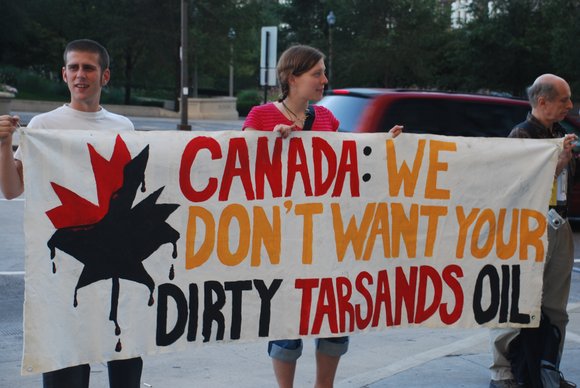 Dear EarthTalk: What are “dirty fuels” and why are they so called?

The term “dirty fuels” refers to fuels derived from tar sands, oil shale or liquid coal. Just like their more conventional fossil fuel counterparts such as petroleum and coal, they can be turned into gasoline, diesel and other energy sources that can generate extreme amounts of particulate pollution, carbon emissions and ecosystem destruction during their lifecycles from production to consumption.

“Because tar sands [have] more sulfur, nitrogen, and metals in [them] than conventional oil, upgrading and refining [them] causes a lot more air and water pollution and greenhouse gas emissions,” reports the Natural Resources Defense Council (NRDC), a leading environmental non-profit. “On a lifecycle basis—that is, extraction all the way through combustion—tar sands cause about 20 percent more global warming pollution than conventional oil,” adds NRDC. “Oil shale and liquid coal are even worse, causing nearly 50 percent more global warming pollution and over double the lifecycle emissions of conventional oil…”

In North America, the majority of such fuels come from Canada’s vast boreal forest, to where tens of millions of birds flock each spring to nest. “Tar sands oil development creates open pit mines, habitat fragmentation, toxic waste holding ponds, air and water pollution, upgraders and refineries, and pipelines spreading far beyond the Boreal forest,” reports NRDC. “This development is destroying habitat for waterfowl and songbirds that come from all over the Americas to nest in the Boreal.”

Beyond impacts at the extraction sites, dirty fuels cause pollution problems all down the line. For this reason, environmental leaders are opposed to the proposed Keystone XL pipeline which, if approved and built, would transport tar sands fuels through the Midwestern U.S. to refineries in the Gulf of Mexico.

“Refinery communities like Port Arthur, Texas...are already unable to comply with their air pollution regulations, so dirtier fuel is the last thing they need in their refineries,” adds NRDC.

And while dirty fuels may reduce our reliance on foreign oil, they won’t help reduce gas prices as they are so expensive to produce that gas prices would have to be higher than they already are in order for them to be profitable. “They also can't help with stabilizing gas prices in the case of a disruption to oil shipments because each new tar sands project requires huge infrastructure and capital investments, so it takes years for new tar sands projects to come on-line—it’s not as though there is loads of spare tar sands oil just waiting to be put through the pipelines,” says NRDC’s Elizabeth Shope.

“The fact is, we don't need these fuels,” she adds. “We can reduce oil consumption by increasing fuel efficiency standards, and greater use of hybrid cars, renewable energy and environmentally sustainable biofuels. What's called ‘smart growth’—how we design our communities—is also a very important element in meeting our transportation needs.

“North America stands at an energy crossroads [and] we now face a choice: to set a course for a more sustainable energy future of clean, renewable fuels, or to develop ever-dirtier sources of transportation fuel derived from fossil fuels—at an even greater cost to our health and environment.”