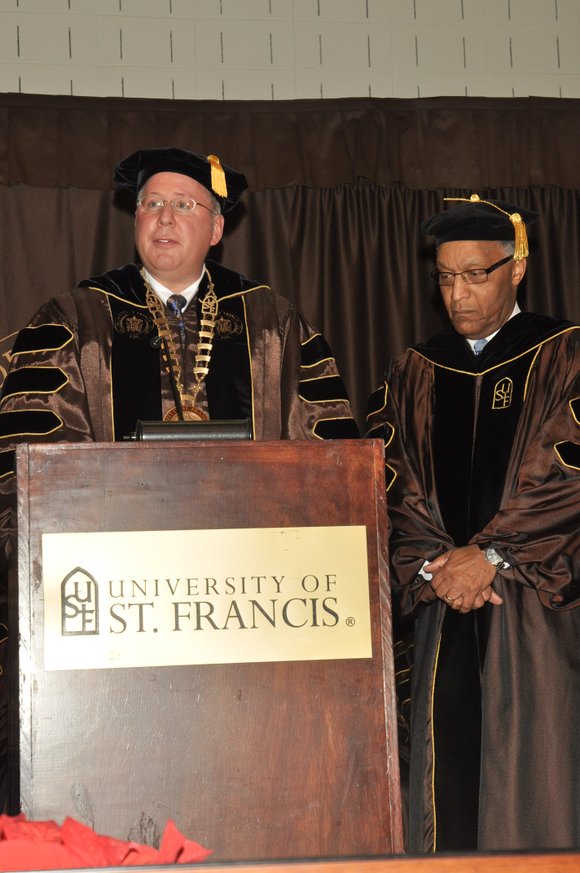 The University of St. Francis (USF) presented the Saints Francis & Clare Award to J.D. Ross, a well-known leader in education and health care in the region. The award was presented during the university’s Winter Commencement ceremonies.

The Saints Francis & Clare Award is an opportunity for the university to celebrate the teachings of its patron saints and their relevance to today’s world by recognizing persons who model Franciscan values through their daily living and work, according the USF President Arvid Johnson, who presented the award along with USF Board of Trustees Chairperson Kathleen McGowan.

Ross, who also gave the commencement address, is retired executive director of the Will-Grundy Medical Clinic in Joliet and retired president of Joliet Junior College, where he worked for 32 years in a variety of leadership positions.

Instrumental in furthering education, economic development and quality of life for the area, as well as dedicated to community service, Ross serves on the University of St. Francis Board of Trustees, of which he is immediate past chair. He is the Will County representative to the Board of Directors of the Regional Transportation Authority; member and secretary of the Board of Directors of Cornerstone Services Inc.; member of the Presence Saint Joseph Medical Center Board of Directors; member and past president of the Kiwanis Club of Joliet and member of the Development Committee for the Board for the Joliet Area Historical Museum

He is an annual presenter on ethics in business and on medical issues facing the community for the Joliet Region Chamber of Commerce Leadership School. He also annually speaks to participants of the Joliet Rotary Youth Leadership Program on the topics of ethics, communications and leadership.

Ross has been involved in the Three Rivers Education Partnership, including as a past chair; the Board of the National Council for Workforce Education, including as past president; the Board of the Illinois Council of Community College Administrators, including as past chair; the Workforce Investment Board of Will County; The Governor’s Task Force for Human Workforce Development; Career Counselor and Presenter for the American Association of Community College Future Leader’s Institute. He has also served the on the Boards of Directors of the Will County Center for Economic Development and the Joliet Region Chamber of Commerce and Industry. He is a founding member and a past president of the Joliet Area Historical Museum; a founding member of the Will County Community Foundation; and past Board Chair and Campaign Chair for the United Way of Will County.

The recipient of many honors, Ross holds a Lifetime Achievement Award from the Joliet Region Chamber of Commerce; The Sangmeister Medal of Excellence from Silver Cross Hospital; Founder’s Award from the Presence St. Joseph Medical Center; an honorary doctorate from Lewis University; and The United Way Osmond Award for Distinguished Volunteer Service. He is an inductee into the Susan Wood Hall of Fame at Joliet Junior College and the Joliet/Will County Project Pride Wall of Fame.

Ross holds a bachelor’s degree from St. Ambrose University in Davenport, Iowa and a Master of Science degree in Educational Administration from Western Illinois University in Macomb, Ill.

Ross and his wife, Helen, are residents of Joliet. They are the parents of two children, Michael and Lynn.