MLK: Militant of the 21st Century 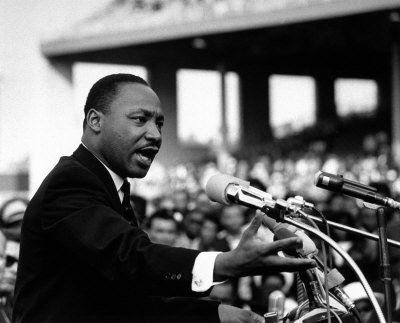 He’s no longer that visually distant, two-dimensional figure, limited to speaking a single sentence taken out of context and shorn of its true meaning. Instead, the honest scholarship and media commentary considering what King faced and what he did have broken through the obscuring fog of conservative, and yes, centrist, propaganda.

In part, that’s because, today the confrontation between the forces of progress and the racist reaction to that progress is sharper than any time since the 1960s.

That command has become particularly compelling again because of the remarkable juxtaposition of present-day developments and anniversaries of past landmark events. The latter include: the 50-year anniversaries of the climactic years of the Civil Rights Movement, especially the year 1963, when King delivered his “I Have A Dream” speech at the March on Washington; and of the assassination of President John F. Kennedy, whose support of the civil rights struggle, tentative though it was, made him Blacks’ most important presidential ally since Abraham Lincoln. And it also includes the 150th anniversary of the Civil War and the Emancipation Proclamation.

The completion of the King Memorial in Washington – and the welcome controversy about its design helped immeasurably as well. The controversy itself was a metaphorical breath of fresh air, blowing away at least some of the clouds of stultifying hero-worship that had for too long distorted the fact that the real Martin Luther King, Jr. was, above all, a great provocateur.

Speaking in the early 1990s, when the conservative political ascendancy was at its height, Rev. Hosea Williams, one of King’s lieutenants during the civil rights struggles, explained that “There is a definite effort on the part of America to change Martin Luther King, Jr. from what he was really about – to make him the Uncle Tom of the century. “ Williams insisted, “In my mind, he was the militant of the century.”

Williams was right, and King’s importance – his militancy – is still not completely understood today.

He didn’t “make” the Civil Rights Movement. He wasn’t its operational leader or its major tactician. But he was its national and international spokesman – the man who, speaking in that rich baritone, could turn words into emotions that were otherwise inexpressible and into word-pictures that represented the entire tapestry of the centuries-long Black freedom struggle.

Dr. Martin Luther King Jr.’s 13-year life on the national stage brilliantly represented the courage it took in those decades to challenge the seemingly overwhelming power of the South’s racist power structure. Far less acknowledged is the courage it took for King – after the passage of the Civil Rights Act of 1964 and the Voting Rights Act of 1965, and his being awarded the 1964 Nobel Peace Prize – to resist the temptations of partial success and his own fame.

Instead, King kept moving leftward, to confront the racial and economic injustice that had created and maintained the Black ghettos of the North, and the national hubris that had led America into the quagmire of war in Southeast Asia.

For this he was pilloried by President Lyndon B. Johnson and much of the White liberal establishment, and a good portion of the civil rights and Black political establishment, too. His insistence that nonviolence was still a viable means of social change was ridiculed, as were his plans to stage a multiracial Poor Peoples March on Washington and involve himself in the bitter sanitation worker’s strike in Memphis, Tenn.

But those difficult years were actually King’s finest hours. At the moment of his assassination, he was standing where he had begun his public life: with ordinary Black people who were being unjustly denied their human rights.

King’s refusal to submit offers a lesson to take to heart at this moment when conservative politicians and theorists are trying to restore inequality of opportunity as the law of the land.

It tells us we should adopt King as The Militant of the 21st Century, too.