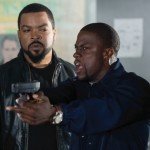 Ice Cube and Kevin Hart are the perfect pair.

Kevin Hart is becoming the crown prince of comedy. These days, he’s the little, impish comedian who serves up big, huge laughs. In fact, his comic chops are often one of the most redeeming qualities in the films he headlines. Point in case:

Rookie cop vs. a jaded career officer. It’s a pairing that is almost cliché in cop movies (48 Hours). The formula gets a 2014 refresh courtesy of screenwriter Greg Coolidge (Employee of the Month) who concocted the storyline and fleshed it out with several other scribes. For the most part, the script sticks to comedy/action crime story fundamentals: two diametrically opposed cops, a skeptical commanding officer back at the precinct headquarters, a seemingly unsolvable crime and a diabolical villain. The success or failure of a movie that sticks to these essentials, rest more on the cast, their chemistry, the direction and the pacing of laughs and action than originality. When audiences enter theaters, based on commercials and trailers, they pretty much know what to expect. It’s the aforementioned variables and finishing touches that will shape their opinions of films like Ride Along.

Ben (Hart) is a high-school security guard by day and a video game junkie on his off hours. He lives with his girlfriend Angela (Tika Sumpter) in Atlanta. He’s ambitious enough to have put in an application at the local police academy, with hopes of a promising career that will set him up to marry his lady friend. He sheepishly seeks the approval of her brother; an APD Detective named James (Ice Cube), who is not an ally.

James will only accept Ben as a genuine suitor for his sister’s affections if he goes on a “Ride Along” with him and experiences a cop’s life firsthand. The mouthy, ditsy, optimistic Ben rides shotgun as the sullen, curmudgeon and pessimistic James shows the wannabe brother-in-law the ropes. As James tries to solve a mystery involving an elusive drug kingpin named Omar (Laurence Fishburne), Ben is his wide-eyed apprentice.

Director Tim Story has not had the chance to demonstrate a great aptitude for the comedy-cop genre in previous films (Think Like a Man, Barbershop, Fantastic Four). His action scenes are decently choreographed, but not spectacular. He’s better at ratcheting up the comedy elements and giving his cast plenty of room to improvise and take verbal jabs at each other. And, he throws in some incredulous scenes where the duo bungles things badly, yet their actions save them and evoke side-splitting guffaws: Ben and James are interrogating a suspect, Ben’s bravado gets the better of him and he shoots the crook. It’s shocking, funny and absurd. Fortunately, these staged moments appear frequently enough to offset some very predictable devices: You’re expecting James’ lieutenant to say at any moment, “I’ll have your badge for this,” or “I’m taking you off the case.” The sentiments are there, the words are fortunately never uttered.

Kevin Hart is as animated as a puppy who has to pee and is looking for a clue that his owner is getting ready to take him to the park. The bashful eyes, the seemingly wagging tail, the simpering whine. He’s vulnerable, manic and cuddly. It’s hard not to like him as Ben. Hard not to see that he is building a faithful fan base (young, urban, hip) that will give him a solid film career. Ice Cube is his perfect foil, he’s mean and dead serious, “You thought I was crazy? No baby I am nuts.” He growls, sneers and threatens like the future brother-in-law from hell. Tika Sumpter is sweet and makes the perfect referee for the two opposing factions. John Leguizamo and Bryan Callen play James’ fellow officers and Bruce McGill the precinct lieutenant. All are decent, but do not give indelible performances. Fishburne, with his behemoth frame and deep Othello voice, is more impressive and quite intimidating.

The police dudes get themselves into a lot of predicaments. Just as you think it’s all over and the Fat Lady will sing – or pump a bullet – the movie gets a second wind and storms into a fourth act. Not sure how wise this is, but the added length is still, for the most part, engaging.

Rumor has it that at one point Ryan Reynolds was to play the Ben role and Dwayne “The Rock” Johnson was to be James. The producers should thank their lucky stars this project didn’t gel until Hart and Cube came along. They make the movie. They steal the film.

You walk out the theater and there’s a thought bubble above your head that says: “Was this movie excellent? No. Do I want to see a sequel? Hell yeah!”

That little imp has done it again.