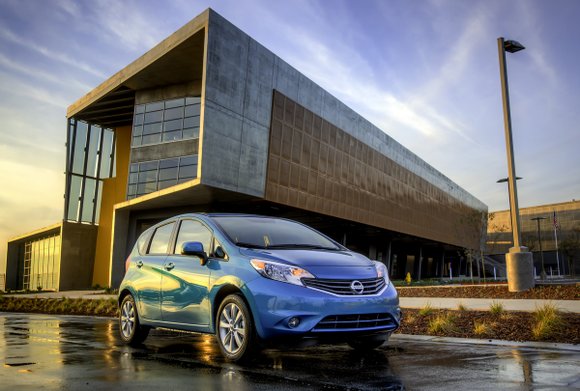 The Nissan Versa Note SV was one of those capable vehicles that seem to have slipped under the radar.

This was not the Versa sedan; the Note was a five-door hatchback that looked like a miniature minivan that was capable of toting five people. But four adults could ride in comfort for long hauls.

The Versa Note was powered by a 1.6-liter four-cylinder engine that made 109 horsepower and 107 pound-feet of torque. It was mated to a continuously variable transmission (CVT).

Even though the car weighed a scant 2,482 lbs., it didn’t set the world on fire in terms of speed, from any perspective. Still, the Versa Note came across as an extremely pragmatic car.

It used Nissan’s global V platform. Along with the new engine, CVT transmission and redesigned driveshaft, the 2014 Versa Note was about 300 lbs. lighter than the model it replaced.

No doubt, the weight reduction contributed to an EPA rating of 31 mpg in the city and 40 mpg on the highway. With only a 10.8 gallon capacity fuel tank, it is hard to appreciate the gas sipping characteristic of the Versa Note. Still, at the end of the month your fuel budget will not be expended.

The Versa Note had a steeply sloped front windshield and sculpted doors. The styling was meant to enhance fuel efficiency. The drag coefficient was 0.298 which was a nine percent reduction compared to the 2012 Versa hatchback.

Our CVT-equipped test model, there is a five-speed manual, had Nissan’s first Active grille shutter that reduced drag force. It closed at speeds more than 20 mph and up. The grille also featured multi-reflector headlights and what Nissan called “the Notes’ boomerang rear taillights.”

This year’s model was six inches shorter than the version it replaced but the 102.4-inch wheelbase increased interior space. On a run to the airport, the passenger had a sizable roller duffle bag, a full back pack and a big tote bag. The luggage was just tossed on the back seat and there was room to spare.

It snowed here heavily the week of the Nissan Versa Note test drive. There was some slipping and sliding as the Versa Note cornered on side streets. But not once did the front-wheel-drive hatchback get stuck or come close to getting stuck.

The car had a surprising amount of equipment. In the cold weather, a smart key for push button lock and unlock as well as start and stop was appreciated. As was the heated front seats. The equipment was part of the SL package that included 16-inch alloy wheels.

A navigation system was at the heart of the technology package. It included voice controls, traffic and weather reports, points of interest powered by Google, and around view. The package also included text messaging, heated side view mirrors as well as Pandora and streaming audio via Bluetooth.

Given the snow and the cold during the week-long test drive of the 2014 Nissan Versa Note, the car proved that it is a vehicle for all seasons, literally. The Versa Note navigated through snow and over slush filled streets without a problem.

It certainly proved to be an everyday driver, especially when some of the days are less than great. The base price of the test vehicle was $15,990. Add the options as well as the $790 freight charge and the total came to $19,545. That is not bad for a car you can drive in relative comfort no matter the weather.