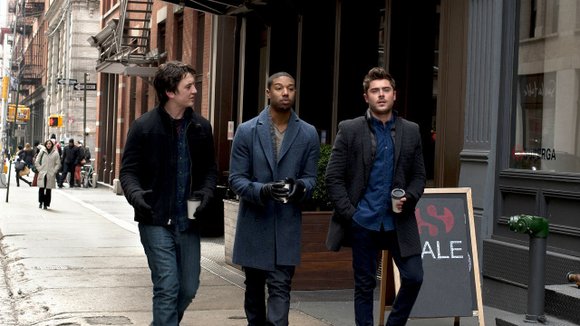 Labor Day (PG-13 for sexuality, mature themes and brief violence) Jason Reitman wrote and directed this adaptation of the Joyce Maynard best seller of the same name about a depressed single-mom (Kate Winslet) who, along with her son (Gattlin Griffith), ends up kidnapped by the escaped con (Josh Brolin) she unwittingly offers a ride. Cast includes Tobey Maguire, James Van Der Beek and Maika Monroe.

That Awkward Moment (R for sexuality and pervasive profanity) Romantic comedy revolving around three confirmed bachelors (Zac Efron, Michael B. Jordan and Miles Teller) who make a pact to remain single only to have the promise tested when two of them fall in love. With Imogen Poots, Mackenzie Davis and Jessica Lucas.

12 O’Clock Boys (Unrated) Crime does pay documentary profiling a biker gang of troubled teens inexplicably given free rein by the police to terrorize the citizens of Baltimore.

At Middleton (R for sexuality and drug use) Romantic romp revolving around the antics of a couple strangers (Andy Garcia and Vera Farmiga) who meet and fall in love while their kids are taking a tour of a college campus. With Taissa Farmiga, Tom Skerritt and Spencer Lofranco.

Best Night Ever (R for profanity, graphic nudity, drug use, crude humor and pervasive profanity) Parody of the road trip genre about a bride-to-be (Desiree Hall) who gets more than she bargained for when she ventures to Vegas with her bridesmaids for a bawdy bachelorette party. Co-starring Samantha Colburn, Eddie Ritchard, Crista Flanagan and Jenny Lin.

Brightest Star (Unrated) Romantic dramedy about a jilted college grad (Chris Lowell) who tries to make himself over to win back his uptight ex (Rose McIver), only to meet a free-spirited bohemian (Jessica Szohr) who likes him just as he is. Support cast includes Allison Janney, Clark Gregg and Peter Jacobson.

Jobriath A.D. (Unrated) “It’s better to flame out than to fade away” biopic recounting the brief career of Bruce Wayne Campbell (1946-1983), aka Jobriath, the first openly-gay rock star, and the first to die of AIDS.

Love Is in the Air (Unrated) Transatlantic comedy about a lawyer (Nicolas Bedos) who makes the most of a second shot at romance with his ex-girlfriend (Ludivine Sagnier) when he finds himself seated next to her on a flight from New York to Paris. With Jonathan Cohen, Arnaud Ducret and Brigitte Catillon. (In French and English subtitles)

Somewhere Slow (Unrated) Road flick about a fugitive from justice (Jessalyn Gilsig) who is befriended by a teen drifter (Graham Patrick Martin) she meets while on the run after a botched convenience store robbery. With Robert Forster, Lindsay Crouse and David Constabile.

Tim’s Vermeer (PG-13 for profanity) History of art documentary, directed by Raymond Joseph Teller (mute half of Penn & Teller), tracing inventor Tim Jenison’s attempt to decipher how 17th C. Dutch Master Johannes Vermeer managed to paint so realistically over a century before the invention of photography.

The Wait (R for sexuality, profanity, drug use and brief nudity) Paranormal thriller about a pair of grieving sisters (Jena Malone and Chloe Sevigny) who disagree about whether or not to bury their recently-deceased mother after receiving an enigmatic phone call from a psychic assuring them that she’s about to be resurrected. With Luke Grimes, Devon Gearhart and Michael O’Keefe.