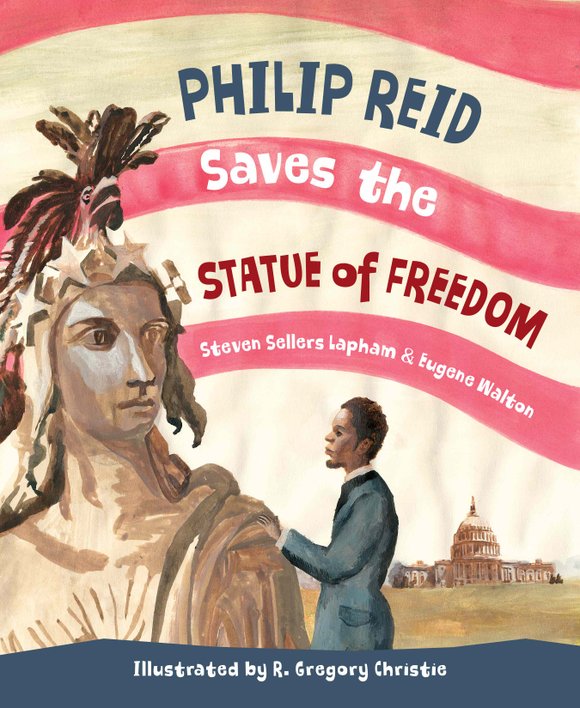 What is your hidden talent?

What’s something you can do that nobody knows about? Are you strong or smart? Can you dance or sing? Are you secretly a baker, an artist, or are you good with animals or fixing objects that are broken?

Philip Reid was born into slavery.

On the Charleston, South Carolina, plantation where he lived, young Philip was observant and liked to learn how things worked. An old slave named Jim taught him about clay, wax, metals, and wood. Philip learned a lot from the blacksmith and the plantation’s pottery-maker, too. One day, when a man came to plaster the Big House’s rooms, Philip watched and helped – and when the man said he needed a smart slave to assist him in his business, money was exchanged.

Philip left his mother and went with Mr. Mills.

There was so much to learn about Mr. Mills’ business, but Philip became very good at any task he was given. He could make plaster molds and fix those that were broken. He learned how to create statues by using shaped plaster and super-hot liquid bronze, which was his favorite job.

With Philip’s help and expertise, Mr. Mills became a famous artist – so when the U.S. government called upon Mills to create a statue for Capital’s dome in Washington D.C., it was quite an honor! But when they went to fetch the plaster model of the statue, there was “something wrong.” The entire thing was assembled, but the Italian craftsman who’d done it refused to tell them where the seams were. It would be almost impossible to move the model without that knowledge.

Or would it? Mr. Mills knew one person who knew a lot about plaster.

He called for his assistant, Philip…

Sometimes, it’s fun to seek out those lesser-known stories to show your children how everyday people can make a difference. “Philip Reid Saves the Statue of Freedom” is a good book for that.

Authors Steven Sellers Lapham and Eugene Walton based this picture book on a true story about a real man and his accomplishments. While smaller children will surely appreciate that, the illustrations by R. Gregory Christie will be the bigger draw for them.

For adults and older kids, though, there’s so much more to the story. The authors include a “what happened next” page, as well as reproductions of Reid’s manumission paperwork and a pay stub inside the covers of this book. Read carefully; that info serves to make a good story even more meaningful.

While you’ll probably find this book on a shelf for preschoolers, I think it would serve 8-to-12-year-olds just as well. For them, reading a book like “Philip Reid Saves the Statue of Freedom” is nothing to hide.