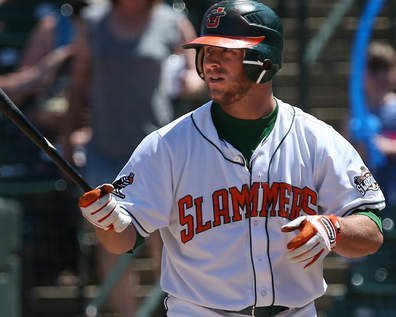 The Joliet Slammers issued this news release on the players chosen for the upcoming All-Star game:

The Joliet Slammers-Presented by ATI Physical Therapy-are proud to announce that three of their players have been named to the West Division Frontier League All-Star Team today. Russell Moldenhauer will be the starter at Designated Hitter for the West in the All-Star Game to be played at GCS Ballpark, the home of the Gateway Grizzlies on Wednesday July 16 at 7pm. Also making the All-Star team from the Slammers are third baseman Grant DeBruin and starting pitcher Blair Walters.

Moldenhauer, the former Washington Nationals prospect, was a 1st-team postseason Frontier League All-Star for Lake Erie in 2013. He was named the Frontier League Player-of-the-Week for his performance in the first week of June this season when he hit .542 with five RBI. The University of Texas product is currently hitting .286 with 8 doubles, 5 homers and a team-best 26 RBI.

DeBruin is currently ranked 4th in the Frontier League in batting average at .357 and has hit safely in 16 of his last 17 games. He leads the Slammers with 60 hits, 12 doubles, a .500 slugging percentage, an OPS (on-base-plus-slugging-percentage) of .903 and has a team-high 16 extra base hits. DeBruin is 10 for his last 21, a .476 batting average in his last five games. He holds the school record for career batting average at UAB-Huntsville at .378.

Walters has been the team’s most consistent starting pitcher and is currently 11th in the Frontier League in ERA at 2.66. He leads the league in innings pitched with 67 2/3 and has one complete game. Batters are only hitting .218 against him in 2014. His best performance came against River City on June 8th when he went 8 shutout innings while allowing just two hits. He struck out 9 and walked only two. Walters, an 11th round pick of the White Sox in the 2011 draft, also threw 7 shutout innings against Schaumburg on July 1st. He allowed only five hits and struck out four to earn the win.

The Slammers take today off and then start an 8-game road trip with a Tuesday 6pm doubleheader against the Normal CornBelters. They then play back-to-back 7pm games in Normal before opening a series in Schaumburg on Friday night at 6:30pm. The two teams will then play a 5pm doubleheader on Saturday before wrapping things up on Sunday at 1pm. The All-Star Break then begins as Joliet will host the Dutch National Women’s Fastpitch Softball team in an exhibition game on Monday July 14 at 7pm at Silver Cross Field. Slammers action this summer will be broadcast live on 1340 WJOL and wjol.com and the audio/video feed of home games this season can be seen at independentprofessionalbaseball.com.