Public meeting on Illiana Expressway set for next week 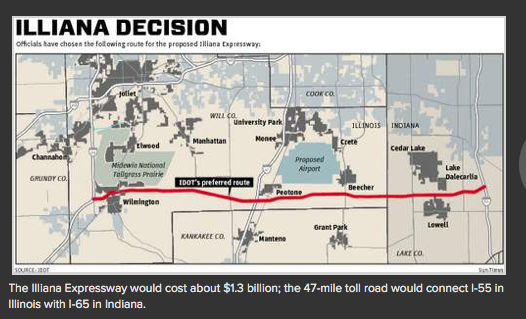 Map of the proposed Illiana Expressway linking I-55 in Illinois and I-65 in Indiana. Source: http://repalriley38.com

A public meeting on the proposed Illiana Expressway will be held from 5 to 7 p.m. July 16 at Wilmington City Hall. Here is a news release on the event:

Will County Board member Ragan Freitag (R-Wilmington) today announced an informational meeting on the proposed Illiana Expressway will be held on Wednesday, July 16 from 5 to 7pm at Wilmington City Hall. The county's ombudsman will attend the meeting, provide an update and answer residents' questions. State Rep. John Anthony (R-Morris) will also participate.

"Residents have many questions about the proposed $1.3 billion Illiana project that will cut across Will County and impact property owners in its path," said Freitag. "Elected officials at both the local and state level should provide opportunities and forums for their residents' questions to get answered and their voices to be heard. This is the purpose of next week's meeting in Wilmington."

The Illiana was first conceived by famed architect Daniel Burnham more than a century ago. The 47-mile route would link I-65 in Indiana near Lowell with I-55 in Illinois near Wilmington.

Congestion on highways in Will County such as I-80, I-55, I-80/94 and I-57 and increased truck traffic wearing down local roadways has led officials to seek alternatives such as the Illiana. Specifically, I-80 has been cited as the choke point of the nation, impeding the transport of goods from shore to shore.

Last August, Will County appointed Michael Hansen to serve as ombudsman for the project and to represent the interests of property owners affected by the proposed Illiana in dealings with the Illinois Department of Transportation. The ombudsman's job is to facilitate clear communication between the state and local residents.

Since his appointment, Hansen has been attending informational meetings like the one planned in Wilmington. Those landowners in the Illiana's path unable to attend next week's meeting can contact Hansen at 815-744-9500 or mikehansen@mikehansenlaw.com.