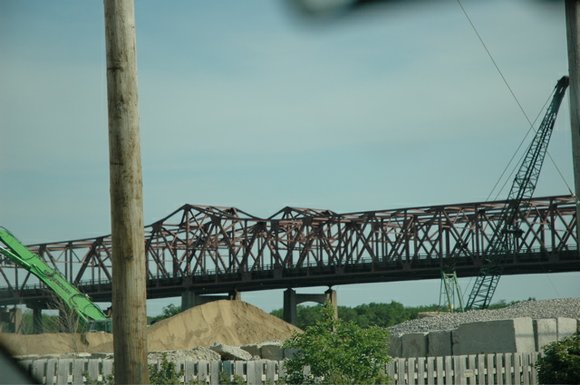 The Interstate 80 bridge over the Des Plaines River in Joliet. Wikipedia/Robert Guico

One of the core responsibilities of government at every level, from the federal government down to the smallest governmental unit, is the maintenance and repair of infrastructure. Infrastructure includes roads, bridges, water and sewer pipes, etc.

The summer season in most northern states usually means construction will be a part of the travel experience. A big part of that experience is accidents. This week a horrific accident with four fatalities occurred on northbound Interstate 55, where traffic narrows to a single lane crossing a bridge over the Des Plaines River.

This accident is one of several fatal traffic accidents in the vicinity of the I-55 construction zone, south of Interstate 80. It is not uncommon for traffic to be backed up southbound from I-80 to the Arsenal Road/I-55 intersection. That’s about five miles. The best travel advice for both safety and travel time is bypassing the construction zone completely, if possible.

There will undoubtedly be an increased emphasis on traffic control for a time. The real issue, though, is the substantial increase in truck traffic on I-55. It’s going to get increasingly worse because of the continuing expansion of the intermodal truck and rail transportation center located next to the interstate. The growth of the Centerpoint Intermodal facilities into the largest inland port in the country provides a very positive economic benefit to the Will County area.

Truck traffic, however, is overwhelming the highways surrounding Joliet. When the construction projects on the I-55 bridge and the Arsenal Road interchange are completed later this year, it will have a positive effect on traffic but it will not solve the truck traffic dilemma converging on Centerpoint Intermodal.

Only one bridge on I-55 crosses the DesPlaines River from Joliet to Arsenal Road. Truck traffic on I-80 often diverts to Route 53. This, in turn, complicates traffic in the Elwood area.

Two months ago this column referenced discussions regarding a bridge across the river that would be a tollway for trucks entering Centerpoint facilities. No public mention has been made of the possibility.

According to unofficial sources, a bridge could be constructed over the river by extending Hollywood Drive (Houbolt Road) across a Centerpoint-owned property, adjacent to the Hollywood Casino, and connect with Laraway Road on the east side of the river. Laraway connects to Centerpoint Way, which connects both the Joliet facility and the Elwood location.

Area legislators have put their muscle behind the questionable $1.3 billion Illiana Expressway, but a bridge over the DesPlaines River seems a far better investment than spending on a highway to provide access to a questionable airport in the Peotone area.

One has to ask the wisdom of a priority that has an unknown benefit vs. the very real need for better access for trucks into the Centerpoint facilities, a known economic engine for the region. Why should there be any hesitation for such a project?

Another infrastructure project that needs additional explanation regarding location is the proposed water/sewer treatment plant project on the near East Side. Last week The Times Weekly ran a story that indicated neighbors were questioning what will happen to property values when the project is completed.

Based on a presentation made in Joliet by the Illinois Department of Transportation last September, the neighborhood adjacent to the new treatment plant may be in for further disruption and loss of property values. Part of the proposed I-80 bridge alignment project calls for the acquisition of 4.5 acres of residential property along the southern edge of the interstate highway.

The property is bordered on the west by River Street, on the east by Water Street, and on the south by Davis Street, according to the IDOT presentation. No public discussions have been held regarding the impact this could have on the immediate neighborhood. The question is “Why”?

Last week in this column, the name of Jim Trizna was referenced where it should have been Jim Eggen.