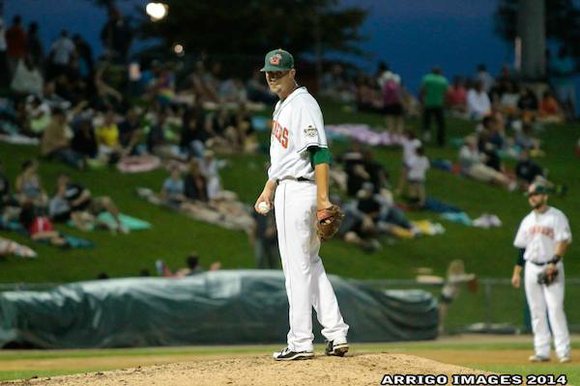 The Joliet Slammers-Presented by ATI Physical Therapy-gave up six runs over the last three innings and lost to Windy City 8-2 on Friday night.

They would tack on another run in the 4th as Soares doubled to lead off the inning. He scored on a Max White base hit as the score became 2-0.

Meanwhile, the Slammers had the leadoff man reach base in each of the 1st four innings but failed to score against Windy City starter Travis Tingle. That included the 3rd inning when Adam Lewis walked and then Chris Epps singled to the start the frame but neither would come around to score.

The leadoff man was retired in the 5th but in the 6th once again the leadoff man would reach as Grant DeBruin singled up the middle. DeBruin entered the game as the league leader in hits with 82 and was 2nd in batting average at .360. Russell Moldenhauer ended the drought as he drilled a long 2-run homer to tie the game at 2-2. It was the Slammers 1st home run since before the All-Star break.

Windy City came right back however and scored twice in the bottom of the 6th on a 2-run double from catcher Mike McGuckin. Crim left the game after 5 2/3 innings and allowed 4 runs on 9 hits and 7 strikeouts.

The ThunderBolts scored two more in the 7th with the help of only one hit of Harry Marino as there were two hit batmen and a walk to help them. They scored two runs as well in the 8th to close out the scoring at 8-2.

With the loss, Joliet falls into last place in the West Division at 22-37.

Tomorrow’s series finale at Windy City starts at 6:05pm. The Slammers then start a three-game series at Traverse City on Sunday at 4.05pm. Joliet will return for another six-game home stand beginning Wednesday July 30th at 7:05pm. The Frontier Greys and then the Schaumburg Boomers will be the opposition.

There will be a Fireworks Friday on August 1st that will also be Princess Night at Silver Cross Field. Slammers action this summer is broadcast live on 1340 WJOL and wjol.com. The audio/video feed of home games this season can be seen for free at independentprofessionalbaseball.com.