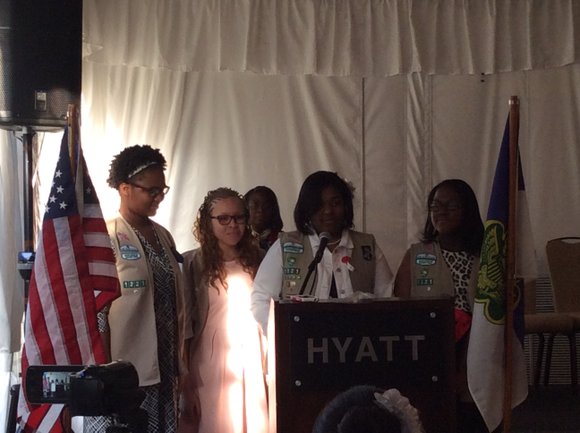 Girl Scout Cadette Troop 51221 of Lisle has 14 new shiny Silver Award recipients. The Girl Scout Silver Award is the highest award that a Girl Scout in middle school can achieve. The members of this troop come from the surrounding cities of Aurora, Batavia, Joliet, Naperville, Wheaton, Yorkville and the villages of Bolingbrook, Lisle, Schaumburg and South Elgin. This year they worked on service projects such as Bullying, Child Abuse, Childhood Obesity, Cancer Awareness and restocking a school library in need of books.

celebrating Service. Letters of congratulations from First Lady Michelle Obama's office, the Honorable Mayor of the Village of Lisle and the Girl Scout Council were shared with the audience.

Each of the six Silver Award project teams presented their work. One team's DVD has been accepted by the Woodridge Public Library for public circulation. In addition, there were five girls that earned the Girl Scout Community Service bar and three that earned the Silver Torch Award for leadership.