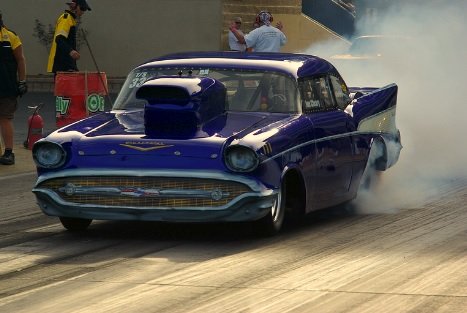 Al Kuefler’s first time out this season was a good one after winning Super Pro. Kuefler raced Justin Ford in the finals, who advanced to 1st place in points. Warren Strum competed a long 7 rounds to take the win. Strum ran a dead-on 10.014 on a 10.01 dial even though Steve McDonald red-lighted in the finals.

Long time Sportsman racer of Route 66 Raceway, Dan McCarrin challenged his son Matt McCarrin in the finals. With a little jumpstart off the line, Dan’s .026 to Matt’s .055, Dan took the stripe while Matt broke out.

Bob Foster was in the Winner’s Circle at the last race, and this time he stood alongside his son, Bob Foster Jr. The final round over Donnie Banski was won at the top end as both riders had similar reaction times. This class had some tough competition as there were three perfect reaction times in competition throughout the night.

The winner in the High School class, Fernando Lopez Jr. is no stranger to going rounds. Last year, he finished up fourth in points and his victory today moves him to 2nd place. Runner-up Meghan Hurley red-lighted in the finals after a long day without her regular race car. Her race car was thought to be fixed until just moments before first round. She jumped in her street car with no time runs and guessed at a dial-in all night.