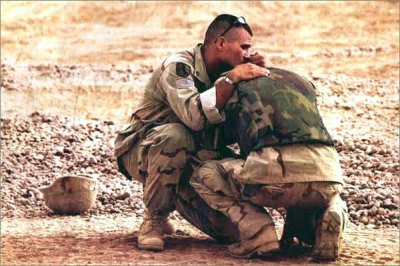 This guest column was written by Denise Williams, a Plainfield resident and Gold Star mother who writes a blog, "Uncommon Sense," for chicagonow.com.

President George W. Bush made a statement that is long overdue. In his remarks at The Bush Institute’s Empowering Our Nation’s Warriors Summit on Feb. 19, 2014, he said,” As most doctors will tell you, post-traumatic stress is not a disorder. Post-traumatic stress, or PTS, is an injury that can result from the experience of war. And like other injuries, PTS is treatable.” He also said something I and others have been saying for a long time, “Treatments exist for PTS”, he said, “just like they do for diabetes.”

This is significant, both taking the word ‘Disorder’ out of the name, as well as the comparison to diabetes. Like diabetes, Post-Traumatic Stress is a condition that can occur as a result of a body’s natural response to unnatural conditions. Neither biological response is in the control of the individual, but more importantly, both genetic factors.

When looking at Type ll Diabetes, or as it is also sometimes known, Acquired Diabetes, there is a lot known but also a lot still not understood. In short, this is a disease of the pancreas, the organ that controls blood glucose levels through the secretion of insulin. When the pancreas does not create enough insulin, Type ll Diabetes develops.

Most people assume that diabetes, at least in the Type ll or Acquired form is preventable. While it is true that certain environmental factors and lifestyles more frequently lead to developing diabetes, it is far from the only cause. Two people can have the same diet and sedentary lifestyle, but only one develops diabetes; most interesting is when these two people are siblings. So, while genetics play a significant role, it is not the sole answer either.

The good news about diabetes is, that with changes to lifestyle and diet, most everyone with Type ll diabetes can be effectively cured. That means they can control their blood sugar and glucose levels, forestalling other complications and issues associated with diabetes. However, once you have been diagnosed with Type ll Diabetes, once the pancreas is no longer functioning correctly, the diagnosis and condition stay with you for the rest of your life. Your body can be returned to a ‘pre-diabetic’ condition, but the pancreas is not capable of regenerating.

Similarly, Post Traumatic Stress can be effectively cured. Like the pancreas, the damaged nerves don’t regenerate, however new neural pathways can form. While the various associated systems in body will remain more acutely sensitive to new trauma, the damaged or malfunctioning parts are functionally repaired. Post Traumatic Stress is therefore not a lifelong, permanent diagnosis or condition.

With these understandings, the conversation has begun that may literally hold the key to saving the lives of our warriors. But to truly understand the ramifications of simply, and rightly, removing the word ‘Disorder’, we need to first understand exactly how Post Traumatic Stress is a biological and physiological disease. Here, I’m using the word ‘disease’ in the literal sense as defined by Merriam-Webster, “…an impairment of the normal state….”