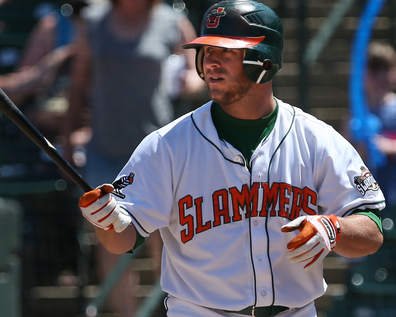 Joliet Slammers first baseman Russell Moldenhauer has been selected Frontier League Player of the Week, as chosen by Pointstreak, the official statistical provider of the Frontier League and the Independent Professional Baseball Federation.

Moldenhauer, in his first season with the Slammers, annihilated league pitching this week, hitting .542 (13 for 24), with 2 home runs and 4 doubles while driving in 5. Moldenhauer reached base at a .598 clip and his slugging percentage for the week was .958. He was acquired in an offseason trade by the Slammers from the Lake Erie Crushers in exchange for reliever Zac Treese.

Last season, Moldenhauer was selected to the postseason all-star team and in 2012 he was chosen for the mid-season team. A third round pick of the Angels out of Boerne High School in his hometown of Boerne, Texas, in 2006, Moldenhauer elected to honor his commitment to the University of Texas where he played college ball. Moldenhauer was selected in the 2010 draft by the Nationals and spent 2 seasons in their system before coming to the Frontier League.

Pointstreak provides the league with its statistical software and in game scoring applications. They aim to deliver "fast scores and cool stats to players, parents, fans, scouts and media." For more information on Pointstreak products visit them at www.poinstreaksolutions.com or www.pointstreak.com.

The Frontier League is entering its 22nd season in 2014 and features 14 teams stretching from Pennsylvania to Missouri and from Kentucky to northern Michigan. The Frontier League annually advances the most players to MLB organizations of any of the independent leagues, and 25 former Frontier League players have played in the Major Leagues.