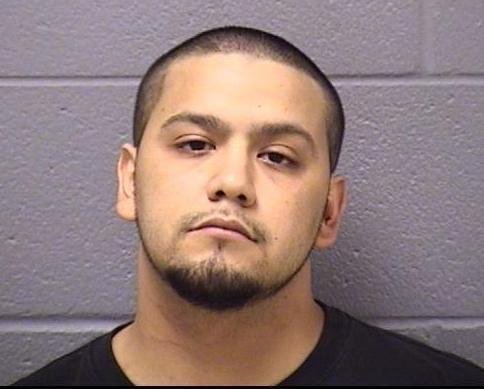 A Joliet man beat his girlfriend so severely that she was knocked unconscious and her eyes were swollen shut, Joliet Police Cmdr. Al Roechner said.

Police were called to the couple's 318 Herkimer St. home shortly before midnight Tuesday and found the woman laying in bed with severe face and head injuries, Roechner said.

The suspect, Joseph L. Ledesma, 27, allegedly attacked his girlfriend after they'd gotten into an argument over whether he had been unfaithful, he said. The woman estimated he'd struck her at least 20 times and that he smashed her cell phone when she attempted to call her father for help, he said.

Ledesma left after she passed out, the victim told police.

Officers had the woman transported to Presence St. Joseph Medical Center for treatment, and were able to take Ledesma into custody about two and a half hours later at Collins and Benton streets. Ledesma took off running when he saw officers, and had to be chased into order to be arrested, Roechner said.

Ledesma was charged with aggravated domestic battery, interfering with the reporting of domestic violence and resisting a peace officer. He was also booked on two warrants for aggravated driving under the influence of alcohol from January 2014 and domestic battery from May 2013.