Lyric’s first ever Rusalka knocks it out of the park 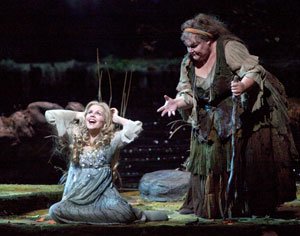 The other night I sat behind soprano Renee Fleming at a performance of Lyric Opera’s first ever production of Dvorak’s opera Rusalka. Lyric’s Creative Consultant, the most enthusiastic of a madly enthusiastic audience, had come from New York where she had starred in the Metropolitan Opera’s production of Rusalka. (She won the Met Opera Auditions with Rusalka’s “Song to the Moon” 25 years ago and has been championing the opera ever since; she and her friend, Sir Andrew Davis, performed it in Seattle at that time.)

Dvorak, who wanted to be known as an opera conductor, wrote 10 operas. Rusalka is a variation of The Little Mermaid story. If Rusalka is an indication of their quality, Dvorak should be on the short list of most performed opera composers––except that he wrote in Czech rather than the common opera languages: Italian, German, French or English. Rusalka, a water nymph irresistibly drawn to a prince (Brandon Jovanovich), begs her father Vodnik, the water goblin (Eric Owens in tuxedo with webbed hands; in fine voice), to help her become human so she can experience love. She makes a deal with the witch Jezibaba (Jill Grove dressed like Helena Bonham-Carter on a manic day, crafting another great witch role) agreeing to give up her power of speech and endure eternal damnation if things don’t work out which, of course, they don’t.

Lyric’s Rusalka is very different from the Met’s. Rather than a straightforward fairytale, Sir David McVicar’s edgy production explores the whether the story is merely the prince’s dream, perhaps drug induced, and the corrupting effect of human progress as it collides with nature. The first is handled by pantomimed action during the overture in which the prince responds to the Foreign Princess’s (Ekaterina Gubanova, regal in look and sound) rejection by ingesting something that makes him topple to the ground; the second shows the forest as a dangerous, decaying environment bordered by large concrete engineering structures at either side (think Grant’s tomb), full of wild, sexualized creatures; and, in the second act, a kitchen full of hanging carcasses and hot fires (Dvorak’s father was a butcher), then a ballroom (Balmoral Castle) walls of which are crowded with trophy deer heads the prince and his friends have shot.

Since few, if any, know the opera or the language, soprano Ana Maria Martinez (Rusalka) could inhabit her role with no inhibitions. She was brilliant and sang the best I have ever heard her. Mr. Jovanovich was equally effective as the prince. His voice has every nuance from sweetness to power. He is an arresting figure even in his final scene, which he sings lying flat on his back. The two have been paired as the adult fairytale lovers since Glyndebourne’s 2009 production and work well together.

Musically, this is an impeccable production. The orchestra plays amazingly for Sir Andrew under whose baton the score becomes a magical tapestry. In the lesser roles of the gamekeeper and the kitchen boy Philip Horst and Daniela Mack, respectively, make impressive debuts as do wood nymphs Lauren Snouffer and Cynthia Hanna and hunter. Wood nymph J’nai Bridges and Hunter Anthony Clark Evans bring honor to the Ryan Opera Center. Andrew George’s choreography and Moritz Junge’s costumes richly support creatures as varied as crows and royal dancers.

If you love, like or have always wanted to see a live opera there are two performances left at the Lyric. Get to one of them if you possibly can. You will not be disappointed.