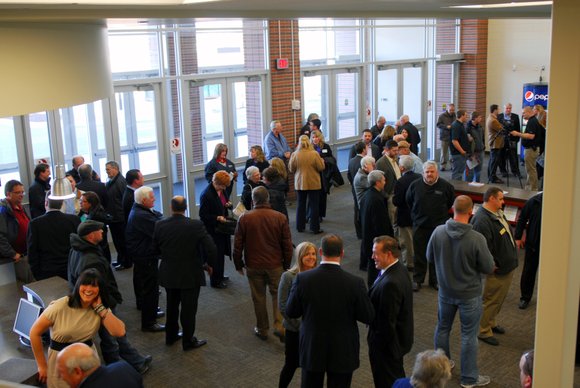 Guests gather in the lobby of the Romeoville Athletic & Events Center Monday for the ribbon cutting ceremony. Supplied Photo

The official opening of the Romeoville Athletic & Events Center in the village’s downtown area, now known as Uptown Square, and already the center is a hit with sports groups and other event organizers, according to village officials.

From a microbrew expo to a national basketball tournament, the management firm for the new center is having no trouble finding takers to book their events at the 76,000-square-foot complex near the intersection of Illinois Route 53 and Normantown Road.

While a “partial opening” for the Athletic & Events Center’s indoor soccer field was held in January to accommodate soccer leagues in need of indoor places to practice for the upcoming season, an official ribbon cutting for the entire center was held Monday.

“Since the building’s been open we’ve had a nonstop stream of users going in and out of the facility,” Romeoville Mayor John Noak said. “We’ve already seen a large number of people not only from our region, but even outside of our region from as far away as Lake Forest. We’re drawing people in from a much broader area.”

These are people who would not normally be coming in to Romeoville and Noak said the center is offering a great opportunity to showcase what the village has to offer to people from outside of the region.

The center will host the Chicago Beer Rally from 6:30 to 9:30 p.m. on May 3, attracting microbrewers from all over, and the Nike Spring Showdown, an NCAA certified event that will attract high school basketball players and enthusiasts from throughout the country.

Noak said the tournament could include more than 350 teams, who would fill approximately 1,500 area hotel rooms. Other events – both athletic and non-athletic – are scheduled in the coming months at the center.

“It goes back to what we’ve always said and that is that the facility is not just for athletics, but in essence a small convention center,” Noak said. “That the nice part about this because it gives us the ability to host a broad range of events throughout the year.”

The indoor soccer field at 70-yards is what is being used for the larger events at the center. Noak said it could be the largest space for events anywhere in Will County.

“We just don’t have a big contiguous space like that anywhere in the region,” Noak said.

They village has contracted with the LaGrange-based Indoor Sports Management Group to oversee operations at the new complex. The contract with the group runs through Dec. 31 of 2019. For the first two years, the group will pay no rent to the village and will keep 100 percent of the profits. For the remaining three years of the contract, the village will receive 2 percent of the income generated by the center, according to the agreement.

Since the village first started planning for the new center officials, including Noak, said they hoped it would be a catalyst for further development in Romeoville’s downtown.

That already is coming to life with retail and restaurant developments already planned for the lots fronting the Athletic & Events Center along Illinois Route 53 and McDonald’s also is considering a location near the center, according to Noak. An exact location for the proposed McDonald’s has yet to be disclosed, but Noak said more details on the plans could be coming in the next couple of months.

“So far this has been a great success for our community,” Noak said. “We’re very excited to be able to showcase all that Romeoville has to offer to a bigger audience.”

For more information about the center, visit www.romeovilleathleticcenter.com.