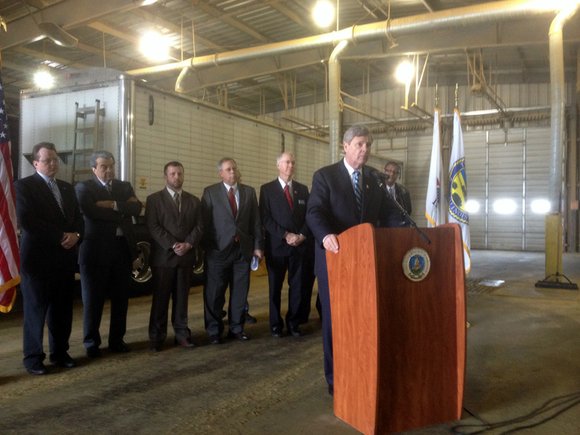 It’s not too often that a member of a sitting U.S. president’s cabinet visits Joliet.

The company exports refined grain to Pacific Rim countries. For many years, China, for example, was shipping all kinds of products to the U.S. and those canisters were then going back empty.

DeLong is playing a major role in changing that trade imbalance by sending containers filled with that refined grain back to China, according to Brandon Bickham, grain division export sales manager for DeLong.

Agriculture is big business for Illinois and that, according to Filder, is by design and has been part of an ongoing effort by Gov. Pat Quinn.

“We are one of the top food processing states in the nation,” Filder said, adding that Illinois is the sixth in the nation for exporting agricultural products, including a particular high protein food additive that is in high demand by a variety of countries throughout the world.

Foster, in introducing Vilsack, talked briefly about the key role the secretary played in the creation of a new farm bill that was recently passed.

Vilsack commended Foster in working to get the farm bill passed. He said he is excited about implementing the new legislation.

U.S. Department of Agriculture Secretary Tom Vilsack visits Joliet to discuss implementation of the new farm bill and the role companies like DeLong at CenterPoint are playing in the larger global agricultural picture.

The last five years have been the best in agricultural exports in the history of the country and that’s due to facilities such as DeLong, Vilsack said.

“Because they have grown and increased to record levels, we now support nearly a million jobs,” he said.

The goal with the new farm bill, he added, is to expand trade promotion into other areas of agriculture including biofuel which could also help to improve the environment and cut down on pollution in other countries.

America, he said, is fortunate because it is “food secure.”

“We rely really on no other country for our food,” Vilsack said. “Hardly anybody in the world can say that, but we in the United States can.”

Greuling said Vilsack’s visit to CenterPoint, right in the heartland of logistics and agri-business, is “very significant.”

“He understands what we are trying to accomplish here,” Greuling said.