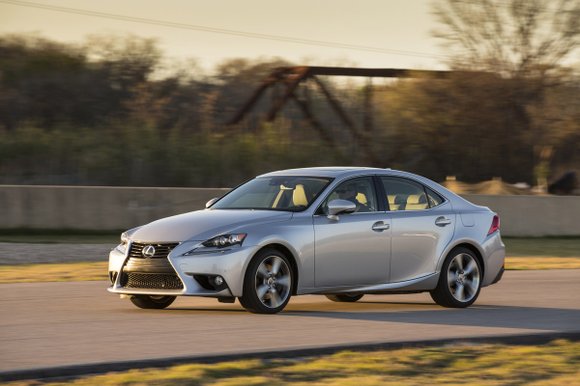 The 2014 Lexus IS 350 may be the best sedan in the Japanese brand’s lineup. We had the all-wheel-drive F Sport version and found it a sporty luxury sedan for enthusiasts.

The car was powered by a 3.5-liter V6 that made 306 horsepower and 277 pound-feet of torque at 4,800 RPM. The engine featured direct combined with port injection and it was mated to an eight speed automatic transmission.

This transmission is from the high performance IS F and featured paddle shifters which went mostly unused. Still, the transmission was capable of automatically selecting the optimum gear and downshift patterns in response to G force.

In Lexus-speak, AWD translated into all-weather drive and the system was capable of sending up to 70 percent of the engine’s torque fore or aft. In normal driving conditions, there was a 50-50 split.

The IS 350 F SPORT featured four drive modes: ECO, NORMAL, SPORT S, and SPORT S+. Our AWD model also had a snow mode. Lexus said exclusive for IS 350 models was an intake sound generator that made the engine growl under hard acceleration.

In Sport S or in Sport S+ mode, the car seemed quicker because it held the gear longer, the shift points were higher; thus, the IS 350 AWD F Sport generated more speed. The sport settings also stiffened the suspension and tightened the car’s steering ratio.

It really was a very quick sedan in either sport mode.

The car had the most aggressive iteration yet of the new face of Lexus; the brand’s spindle grille. LED running lights underlined the headlights and LED taillights completed the illumination. Its lower, longer, wider stance, 18-inch wheels and dual exhaust enhanced the muscular look of the 2014 Lexus IS 350 F Sport.

The interior was a no nonsense affair. All black with white French stitching, the multi-informational display was set back in the dash and that created an awkward shelf. The climate controls were angled between the vents and the center console. And the console held the gear shifter and the controller.

The controller was basically a cursor that let the driver make selections from the information screen like navigation, Lexus Apps Suite, phone, audio, media, trip information, etc. The torque on the mouse could be increased to make cursor control not as slippery.

From the LFA supercar, Lexus borrowed the TFT instrumentation with moving center ring. It was clean, simple and best of all it wasn’t distracting and gave the exact information the driver needed to know.

There was sufficient headroom in the back seats and there was a good bit of leg room. The quality of the rear seat leather matched that of the front seats and the seats themselves were comfortable. They may list the car as a five-passenger sedan but like most cars these days the Lexus IS can carry four adults comfortably and quickly.

Lexus estimated a zero to 60 mph time for the test car of 5.7 seconds and a top track speed of 131 mph. The car’s EPA rating was 19 mpg in city driving, 26 mpg on the highway and 21 mpg combined. The test car’s mileage read out said it averaged 18.6 mpg for the first six of seven days that we tested it.

The base price of the 2014 IS 350 AWD was $41,700. But options including a 15-speaker 835-watt Mark Levinson sound system, a performance adaptive variable suspension, perforated heated seats (the front pair were also cooled), LED headlamps, blind spot monitor and rear cross traffic alert, TFT instrument cluster, adaptive cruise control and a navigation system pushed the sticker to $50,164.

The Lexus IS 350 AWD F Sport could give any luxury sport sedan a good run.