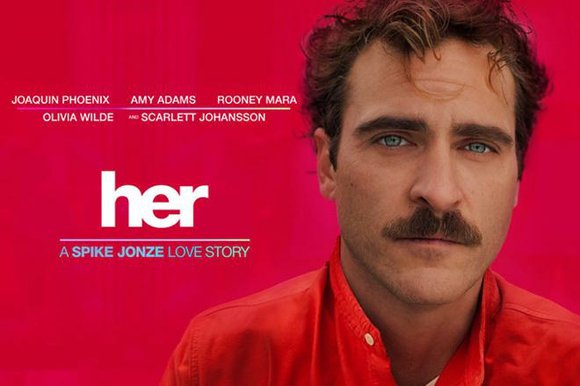 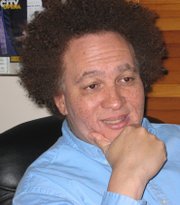 Theodore, played by Joaquin Phoenix, falls in love with a computer in "Her."

A few years ago, Joaquin Phoenix released "I’m Not Here," a novel mockumentary which chronicled his supposed retirement from acting in favor of a career in rap music.

What made the movie mesmerizing was how hard it was to tell whether or not he’d really had it with Hollywood. The three-time Oscar-nominee (for "Gladiator," "Walk the Line" and "The Master") threw himself into the role so convincingly that we had to wait for word of his next picture to know whether or not his new hip-hop persona was a fake.

"Her" is another mind-bending adventure very dependent on his committing to a bizarre character. In this case, Joaquin plays Theodore Twombly, a nerdy introvert who makes his living writing love letters for tongue-tied lonely hearts.

Just past the point of departure, we find him being served with divorce papers by his estranged wife, Catherine (Rooney Mara). The suddenly single geek subsequently searches for a new mate and finds one not at an online dating website but right inside his computer.

Sultry and seductive Samantha (Scarlett Johansson) is an operating system that comes equipped not only with state-of-the-art Artificial Intelligence but with a velvety voice to boot. Programmed to please, she’s ever evolving and adapting herself to fulfill her owner’s fantasies, and it’s not long before Theodore falls for her, computer headset over heels.

After all, Sam gives good phone sex, going so far as to simulate the most inspired screen climax since Meg Ryan in "When Harry Met Sally." Soon, the man and software are an item, and smitten Theodore starts introducing his libidinous laptop to friends as his girlfriend.

Excuse me for having a problem buying into such a farfetched premise, especially since the eccentric protagonist keeps up the charade when he has a chance to date his gorgeous BFF (Amy Adams) after she’s dumped by her husband (Matt Letscher) and needs a shoulder to cry on. But what do I know, given that the film won the Academy Award for Best Original Screenplay?

Anyway, we’re expected to believe he’d rather remain in a frustrating, metaphysical relationship with a piece of software that becomes possessive and jealous of women with bodies. Listen, this silly sci-fi storyline probably would have made a terrific, Twilight Zone TV episode back in the day, but it’s a little much to ask folks well grounded in reality to suspend their disbelief for a couple of hours for the sake of such a preposterous plot.

That being said, I suppose there’s a good chance that the screen-weaned youngsters of the Millennial Generation might find the idea of dating a computer perfectly plausible. What’s in your laptop?

Blu-ray/DVD Combo Pack Extras: The Untitled Rick Howard Project; How Do You Share Your Life with Somebody; and Her: Love in the Modern Age.

To see a trailer for "Her," visit: http://www.youtube.com/watch?v=ne6p6MfLBxc

To order a copy of the "Her" Blu-ray/DVD Combo Pack, visit: