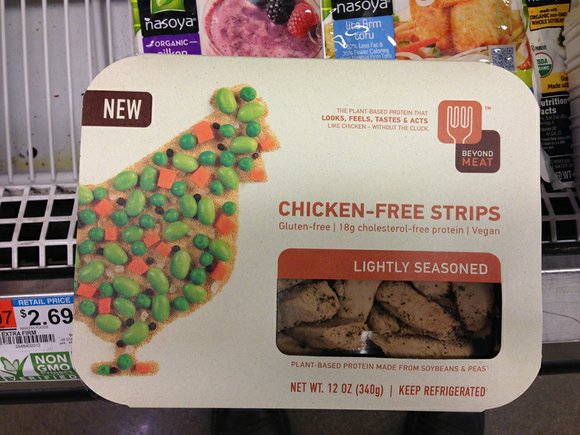 There are more choices than ever for vegetarians with latent carnivorous instincts, from Kellogg's-owned Morningstar farms products to offerings from Beyond Meat, a new venture funded by heavyweights like Bill Gates and Twitter co-founders Biz Stone and Evan Williams. Pictured: Beyond Meat's Chicken-Free Strips "without the cluck." Sid Sowder

Dear EarthTalk: I recently became vegetarian for ethical reasons, but I am missing the taste of meat. Are there any tasty veggie options out there that can satisfy my desire for steak and chicken?

Aside from its brutal treatment of livestock animals, the meat industry is no doubt one of the worst offenders when it comes to the environment. Producing one kilogram of beef requires 150 square meters of land and 15,000 liters of water, most of which is used to grow feed for the animal. That same kilogram generates 27 kilograms of climate-altering carbon dioxide, the equivalent of driving a car more than 100 miles. Indeed, beef has 13 times the carbon emissions of an equivalent amount of vegetable-based protein.

Hungry mouths around the world take a hit, too: Some 70 percent of the grain produced in the U.S. is fed to livestock animals but the land used to grow it could feed some 800 million people instead. For this and other reasons many of us have given up meat altogether. But it doesn’t mean we don’t still crave the taste.

Fortunately, there are more choices than ever for vegetarians with latent carnivorous instincts. One young company, Beyond Meat, has millions of dollars in funding from high-tech heavyweights and has made a big splash in recent months with the launch of its first two meat alternative products, Beef-Free Crumbles and Chicken-Free Strips. Each of its products looks and tastes like the meat it is emulating while offering the same protein content—but without any saturated or trans fats or cholesterol, let alone gluten or genetically modified organisms (GMOs). In taste tests, most consumers can’t tell which dishes contain actual beef or chicken versus Beyond Meat’s self-proclaimed “perfect substitutes.”

The company reports that it takes four-tenths of a pound of soy and pea plants to make a pound of their Chicken-Free Strips, versus three pounds of grain-based feed to get a pound’s worth of meat from an actual chicken. That all translates into many fewer pesticides and carbon emissions and much less water used in the process. Beyond Meat’s investors include the leading Silicon Valley venture capital firm Kleiner Perkins Caufield Byers, Twitter co-founders Biz Stone and Evan Williams’ Obvious Corporation, and even Bill Gates, who has expressed his hope that the company’s products can play a role in switching more people in developing countries over to plant-based proteins.

Of course, there are many other meat alternatives out there, too. A trip down the freezer aisle at Whole Foods yields sightings of Amy’s Bistro Burgers, Gardenburgers, Boca Burgers, Gardein Ultimate Beefless Sliders and Beefless Tips, Dr. Praeger’s Veggie Burgers and Sol Cuisine Meatless Chicken. Meanwhile, the Meat Alternatives section of VeganEssentials.com offers up Upton’s Naturals’ Bacon Style Seitan Strips, Sophie’s Kitchen Breaded Vegan Fishless Sticks, Field Roast’s Classic Vegan Meatloaf, and even Meatless Select Fishless Vegan Tuna. Another classic option is any number of meatless products from the Kellogg’s-owned Morningstar Farms, which are widely available in mainstream grocery stores from coast-to-coast and which account for some 60 percent of the meat alternatives market in the U.S.

With meat production expected to double by 2050 as the world’s human population tops nine billion, there has never been a better time to start curbing our enthusiasm for conventional steaks, hamburgers, chicken breasts and sausages.