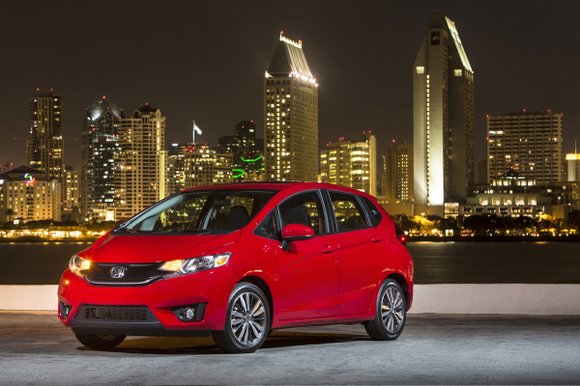 The 2015 Honda Fit EX-L, the third generation of the subcompact, was surprising. The model had many creature comforts that used to be the exclusive domain of much more expensive vehicles and it had an exceptional ride for a vehicle with a short wheel base.

Anyway, the front-wheel-drive car was powered by a 1.5-liter four cylinder engine that made 130 horsepower and generated 114 pound-feet of torque. It was mated to a continuously variable transmission (CVT). This Honda Fit had an EPA rating of 32 mpg in the city, 38 mpg on the highway and 35 mpg combined.

We are not fans of CVTs. But this one was quiet at low speeds and like most CVTs it translated power to the pavement deceptively. Under hard acceleration this CVT was relatively loud and it sounded like the car wasn’t really moving that fast. But we checked the speedometer and found ourselves doing 80 mph. That was quite fast enough; actually, it was more than the speed limit for a city expressway and most Interstates.

The Honda Fit wasn’t bad on city streets either. A little too much road noise got into the passenger compartment but that wasn’t disconcerting. The MacPherson strut front suspension and torsion beam rear suspension translated into a fairly smooth ride without a lot of small car bumps.

The passenger cabin was really spacious and it felt even bigger because of the panoramic view all round. The Honda Fit had a lot of glass; it seemed like a glass surround. The trick was the glass pane between the A-pillar and the passenger side window as well as the glass insert between C and D-pillars created an open air feel. Coupled with the Fit’s high seating position, the sight lines were great.

For 2015, the Fit got slimmer headlights, a lower air intake and what Honda called a linear sloped hood and windshield. The car looked pretty sleek for a subcompact car.

The interior room was increased and interior materials improved for this model year. Soft touch surfaces and controls were accented with silver. Instruments and dials were backlit in blue. Our test vehicle had a navigation system and a touch screen.

There was satellite radio, Bluetooth, a smart key, push button start, a rearview camera and what Honda called LaneWatch. It is a camera that turned on when the right turn signal was engaged and showed you what was in that lane. The image was shown on the information screen.

Potentially, that prevents two fairly common occurrences: Turning short, catching wheels and worse on curbs, or, cutting someone off or clipping something or someone. About the only thing we could find to quibble about was the audio control for the sound system, it was digital. In other words, you had to press the touch screen to increase or decrease the volume. That seemed a little distracting.

Still, there was plenty to be pleased with about the 2015 Honda Fit. In addition to the USB jacks and power plugs, it also had a high definition multimedia interface (HDMI) jack.