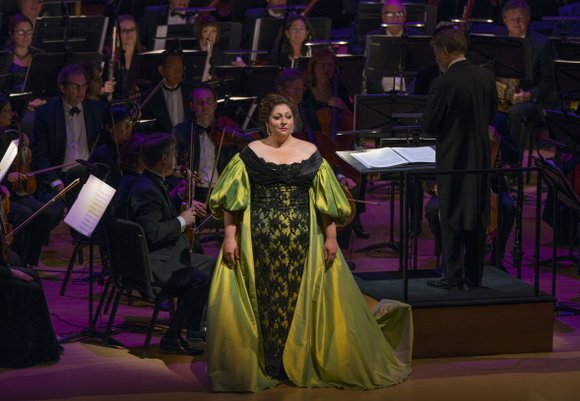 Lyric Opera invited 3563 of its nearest and dearest fans and supporters to dress up and celebrate its 60th birthday at a gala concert and ball on Saturday, November 1. In Lyric’s early decades, a night at the opera was An Occasion for which attendees dressed accordingly; these days, people usually dress casually. But, as every man is handsome in a tux, and every woman is beautiful in a formal, the excitement quotient rose mightily from the all the glam and glitz.

The Civic Opera House also dressed for the occasion, debuting its new stage shell designed by Jeanne Gang and Studio Gang. (The acoustical consultant was Chicago-based Threshold Acoustics and Thornton Tomasetti, another local firm, provided the structural engineering). Made of wooden modules “bent into conic surfaces,” the shell has both visual and acoustic qualities, can be both assembled and taken down quickly, is economical, complements the historic Art Deco-inspired theater and enables Civic to expand its concert initiative. It performed wonderfully.

Sir Andrew Davis conducted soloists and the Lyric Opera Chorus, actress Jane Lynch (who started her career in Chicago) was the charming and witty Mistress of Ceremonies, and Second City punctuated the music with delightful skits.

Honoring the past and looking forward to the future, artists ranged from Renee Fleming and Susan Graham (who made her Lyric debut 25 years ago) to current artists and alumni of The Patrick G. and Shirley W. Ryan Opera Center. [The quality of the Ryan program is one reason Lyric has the healthiest bottom line of extant companies.

Sir Andrew opened the evening conducting the ever-more-excellent Lyric Opera Orchestra in a spirited reading of Beethoven’s “Leonore No. 3” Overture (Fidelio). Martina Rebeka (Idomeneo) Christine Goerke (Macbeth), Quinn Kelsey Prologue from Pagliacci,and Susan Graham Marguerite’s Romance (The Damnation of Faust). The first half ended with Renee Fleming and Ramsey Lewis collaborating on “Over the Rainbow.” Stephanie Blythe opened the second half of the evening with the “Habanera” (Carmen). She was followed by Ana Maria Martinez “Un bel di (Madama Butterfly), Amber Wagner (Tannhauser), Johan Botha “Nessun dorma" (Turandot), and Eric Owens ‘Ol’Man River” (Show Boat). Repertoire ran the gamut from Mozart, Rossini, Berlioz, Verdi and Puccini to Ralph Vaughan Williams (Serenade to Music) and Jerome Kern and Oscar Hammerstein II (Show Boat). The musical portion of the evening ended with the “Everything in the World is a Joke” Recitative and Fugue from Falstaff, which Verdi wrote at 80.

The festivities continued at Hilton where The Diamond Ball, which continued into the wee hours, raised more than $3.2-million.