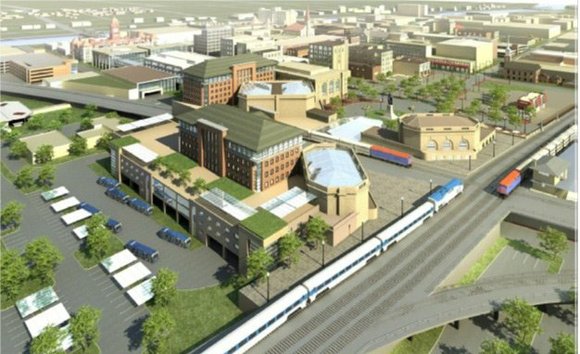 A temporary platform set up for Amtrak and Metra Heritage Corridor commuters has caused problems because of the length of the access ramp and the lack of safe, warm area to wait for trains in the evening.

Construction on the Joliet Gateway Transportation Center is running about six months behind schedule and the temporary platform for Heritage Corridor/Amtrak drawing criticism, the Joliet City Council was told Tuesday.

Lisa Dorothy, a civil engineer for the city who has been coordinating the complicated project, gave the council an update on the state of center construction, which began last year and now won't be completed until sometime in mid-2016.

Railroad bridge and tunnel construction -- a major component in the ambitious plan to create a new train and bus center in downtown Joliet -- is taking longer than anticipated, Dorothy said. That, in turn, is postponing the start of other components, including construction of a new train station and new pedestrian tunnels.

"It's possible we could expedite things (once the railroad work is done), but it's not likely," she said.

The delay did not seem to faze council members, but the problems with the temporary platform set up for travelers using Metra's Heritage Corridor line and catching Amtrak trains did cause consternation.

Among the issues is the long ramp needed to make the platform accessible to disabled patrons that is difficult to manage for those who have trouble walking and the confusion over how people are to access the site, the distance from parking and the best way to keep people informed of changes.

Access to the platform is at Jefferson Street and Mayor Art Schultz Drive, where a temporary trailer to sell tickets has been opened and a pedestrian crossing set up.

Some commuters, however, are crossing before getting to the designated path, and then walking along a curb that's lined with a fence, creating a dangerous situation for both them and drivers, Councilman Jim McFarland said.

The ramp to the platform is so long that one man was forced to carry an elderly woman with whom he was traveling because she could not ascend it on her own using a walker, the council was told.

Councilman Bob O'Dekirk said he didn't know how his mother would have managed when she returned from a trip to St. Louis had he not been there to meet her and help with her luggage.

Dorothy said the federal government has committed to installing a "people-mover" to help people access the platform, but the city has not been informed as to when it will be installed.

The Illinois Department of Transportation is also negotiating with Amtrak to keep its ticket office open until 9 p.m. in order to provide a safe and warm place for people waiting to catch trains, but no timetable has been set for that either, she said. (The city is using the office inside Silver Cross Field as an early morning warming center.)

"If our state representatives can't do something (to expedite getting these things done), then it's up to the city to step up and do something," O'Dekirk said.

Beyond that, the city needs to find a better way to keep residents informed of changes that occur as the work continues in order to reduce the confusion that commuters are experiencing, McFarland said. It's not enough to direct people to the city's Web site or to have people sign up for apps that will alert them to news about the work, he said.

"We can't assume everyone has access to the Web, because a lot of seniors don't," Councilwoman Jan Quillman said.

Councilman Larry Hug suggested the city set up an 800-number that commuters can call on a daily basis to learn of changes.

City Manager Jim Hock said part of the problem is that "things are fluid right now," and changing on a daily basis, making it a challenge to keep people informed. Once things become more settled, it will be easier to put out fliers and brochures instructing people on what to expect and where to go, he said.