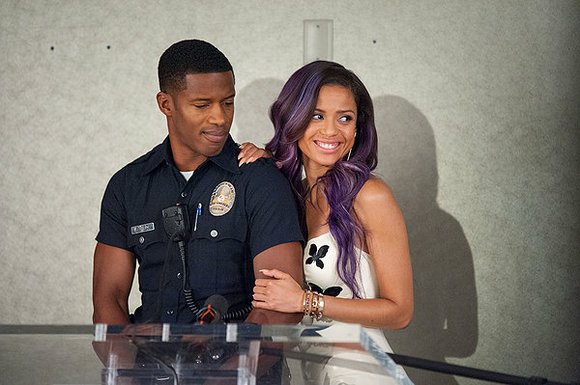 Noni (Gugu Mbatha-Raw) has it all, or so it seems. After years of trying to make it, the emerging pop singer is finally on the brink of superstardom, thanks to several hit singles she recently released, duets with her famous rapper boyfriend, Kid Culprit (Machine Gun Kelly).

Nevertheless, when we meet Noni in the midst of a whirlwind tour of appearances on award shows, she’s secretly miserable and seriously considering suicide. That’s because every step of her assault on showbiz has been dictated by her abusive mother, Macy (Minnie Driver), the proverbial stage-mom from Hell.

Noni no longer recognizes her real self in the mirror underneath the purple hair extensions, the provocative wardrobe, and the phony smile that masks the hard cold truth about a vulnerable soul at the end of her rope. Then, just as she’s set to launch herself from the balcony of a penthouse suite at the posh Beverly Hills Hotel, fate intervenes in the person of Kaz (Nate Parker), the quick-thinking LAPD officer assigned to protect her from the paparazzi and overzealous fans.

Springing into action, he grabs an arm and pulls Noni back over the rail. Now that she has been afforded a second chance at life, one can’t help but wonder whether she’ll wise up and declare her independence from her miserable misanthrope of a mother? Or, will she notice that the right man for her might be the handsome hunk with bulging biceps who saved the day, even if he’s not a rich celebrity like the unreliable bad-boy she’s currently dating?

These are the foremost questions subsequently explored by Beyond the Lights, a steamy romantic romp written and directed by Gina Prince-Bythewood (The Secret Life of Bees and Love & Basketball). Don’t be duped into thinking that you’ve seen this same story somewhere before, given how the plot is vaguely reminiscent of Whitney Houston and Kevin Costner’s The Bodyguard (1992).

Beyond the Lights unfolds in unique fashion. This amorous tale of female empowerment might be better thought of as an engaging blend of hip-hop performances and soap opera drama that’s at its best when leads Gugu Mbatha-Raw and Nate Parker generate beaucoup chemistry while sharing the screen.

Love in the time of hip-hopera!

To see a trailer for Beyond the Lights, visit: