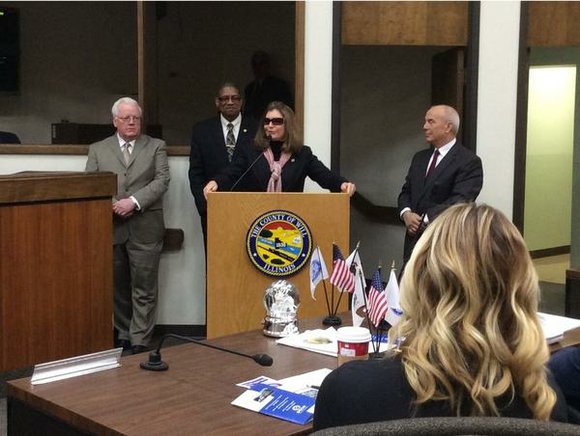 Will County Board member Diane Zigrossi dons sunglasses at last week's board meeting as she jokes about giving up her position to move to Florida. Also pictured (from left) are County Executive Larry Walsh, board Chairman Herb Brooks and Republican Caucus Leader Jim Moustis. Will County

Six new Will County Board members will be sworn in Dec. 1, when the board is reorganized and a new chairman selected from among the members.

The new members are Cory Singer in District 2, Gretchen Fritz and Darren Bennefield (appointed to the board and elected on Nov. 4) in District 9 and Annette Parker and Lauren Staley-Ferry in District 9.

Also joining the board will be Ray Tuminello, a New Lenox Village Board trustee. He is replacing board member Margo McDermed, who was elected to the Illinois House District 37 in the November election.

At last week's Will County Board meeting, the five departing members were recognized for their service.

They are Walter Adamic (D-Joliet) with 26 years on the board, Reed Bible (D-Plainfield) with two years, David Izzo (R-Tinley Park) with three years, McDermed (R-Mokena) with two years, and Diane Zigrossi (D-Crest Hill) with six years.

“It's been an honor to serve Will County as long as I have and work together with so many great people over almost three decades,” Adamic said.

“I was raised and taught to always give back to our communities in whatever manner possible, and along the way, believe I always kept the best interests of Will County residents in mind. Many thanks go to my family and friends for their support and encouragement during my time as an elected official. I look forward to continuing to serve the county and volunteer my time wherever there is a need."

Zigrossi was elected six years ago and leaves the board as the Democratic Caucus chair, the second highest ranking member.

"Much has been accomplished during my time on the Board because everyone came together to find bipartisan solutions to sometimes challenging situations," Zigrossi said.

"I'm proud to have served alongside so many professionals that were most interested in improving the quality of life for our county's residents. The time has come to step aside and allow others to lead, and I look forward to seeing Will County continue to thrive and flourish."

The new board will be seated Dec. 1 during a reorganization meeting, after newly elected board members are sworn-in. The board will then take nominations and vote for a chairman.