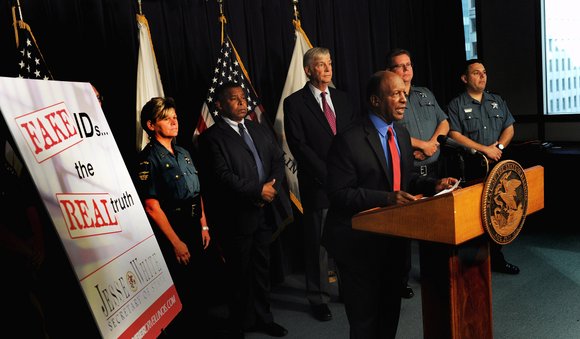 “Many college students who obtain fake IDs do not think of the serious consequences,” said White. “While their goal may be as simple as getting into bars or purchasing alcohol, anyone convicted of possessing or using a fraudulent driver’s license or ID card will receive a one-year suspension of his or her driving privileges. In addition, they face up to one to three years in prison, and a mandatory minimum fine of $500 up to $25,000 or 50 hours of community service.”

White noted that the Internet has made obtaining fake IDs easier. Overseas companies boast of offering fake IDs for a fee. Some students, eager to get fraudulent IDs, are falling for this illegal practice and, in so doing, are providing personal information to these disreputable companies.

“In addition to breaking Illinois law and risking their driving privileges, students are putting themselves at risk for identity theft,” said White. “Over the past two years, more than 1,200 people have been caught using fake IDs.”

White’s office will be visiting and working closely with colleges and universities around the state to further educate students on the penalties and dangers of obtaining a fake ID. The Secretary of State’s college mobile units will help spread the message with outreach efforts and brochures. White’s office has also released a radio public service announcement on the issue of fake IDs, which has been distributed to college radio stations statewide.

Illinois driver’s licenses and ID cards contain more than a dozen enhanced security features designed to make them secure and difficult to reproduce. Secretary of State Police experts travel the state training liquor establishments, law enforcement, banks and other commercial entities on how to spot a fake ID. While a fake ID may look genuine, those with a trained eye and equipment such as a black light or a laser pen can quickly tell the difference.

White also discussed the office’s Safe ID Task Force, which he established and is chaired by White’s Inspector General Jim Burns, former U.S. Attorney for the Northern District of Illinois, as a proactive effort to protect the public and the integrity of the driver’s license and ID card system.

“Our goal is to make Illinois driver’s licenses and identification cards as fraud-proof as possible,” Burns said. “We continue to work through the task force to enhance the security of this vital document.”

The Safe ID Task Force is comprised of representatives from various Secretary of State Departments, including the Office of the Inspector General, Secretary of State Police, Drivers and Vehicles Services, General Counsel and Department of Information Technology. The task force works with local, state and federal agencies to combat fake ID use, and has assisted in national and international efforts to crack down on this illegal practice. Some agencies the task force has worked with include police, the FBI, U.S. Customs and Border Protection, and the U.S. Department of Homeland Security.