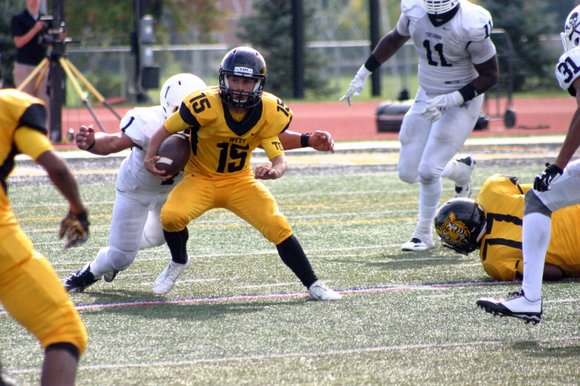 Joliet West is a team on the rise and entered Saturday afternoon's home game against conference power Bolingbrook with a bit of momentum coming off an upset win at Sandburg the week before and at least for one half, it looked as if a win over Bolingbrook was possible trailing 16-7 at half but only one team showed up for the 3rd quarter and it wasn't the Tigers.

Bolingbrook scored 28 unanswered points to open the second half taking advantage of a pair of turnovers and going to the air for a 86-yard bomb from senior Adam Klein to an open Nehemiah Armstrong in stride that took the fight out of the Tiger's defense.

The Raiders (4-1, 3-0) racked up an impressive 474 yards of total offense and stayed atop the Southwest Suburban Blue Conference heading into the second half of their schedule which includes contenders Lincoln Way East and Homewood-Flossmoor. Despite the loss, Joliet West (3-2, 1-2) is looking to bounce back this week on the road at another undefeated conference foe in Lincoln Way East.