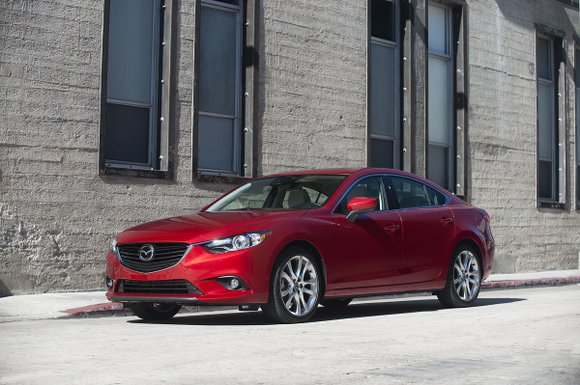 Let’s get straight to it: the 2015 Mazda6 may be the best looking midsize family sedan around. Yes, the current generation has been on sale for one model year but it is just beginning to get some traction in the market.

The four-door Mazda6 was sleek, it had sweeping lines that made it look longer and it had crisp creases. The car sat low to the ground but not so low as to make it look awkward. And it had flowing front wheel arches that gave it a forward motion look even when standing still. It was a slick design.

Not only did the Mazda6 look good it was smart too, featuring Mazda’s SKYACTIV-G technology. It’s an engineering matrix comprised of bores, strokes, smaller combustion chambers, domed piston heads, pressurized direct fuel injection, exhaust and intake valves, etc. In short, it is someplace you don’t want to go without an engineer. However, the bottom line is that the technology improves fuel economy by up to 21 percent.

The Mazda6’s 2.5-liter four cylinder SKYACTIV engine made 184 horsepower and 185 pound-feet of torque. This engine was one of the smoothest running four cylinders that we’ve ever encountered. It had good power, acceleration was immediate and the front-wheel-drive test car had a six-speed automatic transmission.

Coupled with Mazda’s i-ELOOP system; we were not responsible for the name of this regenerative braking system that stored the recaptured energy from braking in a lightweight capacitor that ran accessories and gave the car a boost during acceleration, our Mazda6 had an EPA rating of 28 mpg in the city, an impressive 40 mpg on the highway and 32 mpg combined.

In only got better in the interior. Back seat space was impressive. There was plenty of head and hip room, as well as leg room. The car rivaled much larger sedans in terms of interior space. All this was done while maintaining a fairly large trunk. In other words, it wasn’t a matter of gaining here by taking away there.

The front seat area was simple and straight to the point. The controls were redundant in a good way. This Mazda6 had a touch screen but it was set back a bit in the dash. If you don’t want to reach for it, there was a control dial (read mouse) in the center console. A triad of instruments in front of the driver displayed just about everything the car was doing.

This 2015 Mazda6 bristled with equipment that is normally found in much more expensive cars, or at least it used to be. There was a backup camera with cross traffic alert, it had blind side alert, lane departure warning as well automatic braking to help avoid collisions or minimize damage. Adaptive cruise control, adaptive Xenon headlights, LED daytime running lights were all pretty much the exclusive domain of luxury brands just a few years ago.

The car’s audio system was premium surround sound and it featured satellite radio, an infotainment system capable of playing or streaming music from a smartphone that was connected through the car’s Bluetooth system. The car had a Tom Tom navigation system. The front seats were heated and both were power. The power windows were completely automatic (up and down) all round. There was also a glass sunroof.