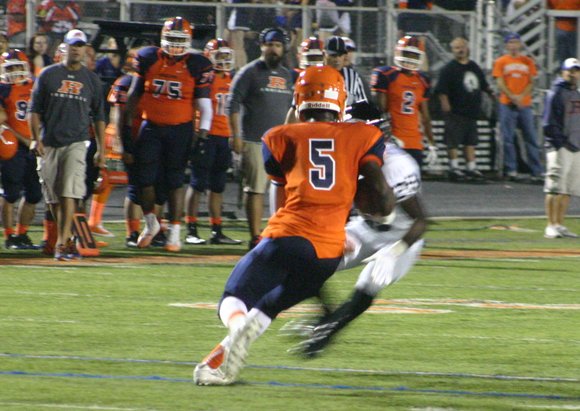 One thing you learn about football in the Southwest Prairie Conference is that any team can win on any given night and that philosophy is holding true this season. Romeoville came into their homecoming game holding only one win on the season suffering losses to Hinsdale South, Bolingbrook, Minooka and Oswego but records can be deceiving.

Senior running back Kelvin Jones scored from 21-yards out to score the first of three touchdowns he would rush for on the night finishing with 121 yards on 18 carries. Senior Gil Whitaker (18 carries for 90 yards and a score) bulled his way for an 11-yard score to take a 14-0 in the first and set the tone for the remainder of Romeoville's pounding rush attack.

The Cougars found themselves trailing 22-7 after senior Spartan quarterback Anthony Kitchens hooked up with receiver Charles Hunter on a short pass but Hunter would break a tackle and out race the Cougar defense for a 72-yard score. Just before the half Romeoville scored again on a nice broken play run for 55-yards from D’lante Dawson to take a 28-7 lead into the break which proved to be a cushion South couldn't come back from.

Plainfield was forced into throwing the ball which opened up some big plays but also three interceptions by Spartan defenders including a pair from linebacker Romeoville linebacker Anthony Kopel.