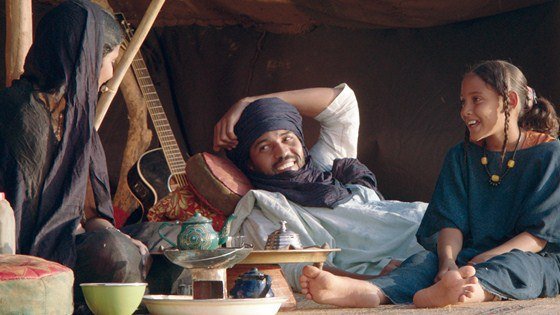 The film is filled with contrasts. The long-following dresses and head wraps of the women and occassional caravans of camels and sights of herds of cattle are punctuated by the use of cell phones, gleaming motorbikes and the ominous presence of military trucks and high-powered rifles. It is a juxtaposition that jarringly places the story in the present and a reminder of the imminent danger that lurks beneath the idyllic scenes.

As the film unfolds, we see the gradual unraveling of the everday peace of this tiny village. Each day, there's a new restriction. First, a curfew. Then an edict that no music be played in private homes. A couple caught partying with friends is later stoned to death. The youth are ordered to stop playing soccer. Although their ball has been taken from them, the young boys play in mime, without a ball, in protest. Smoking is also banned, but the ban is regularly abused, even by the jihad's very own.

The edicts finally go from the sublime to the ridiculous with the latest ban having to do with "any old thing in a public place." Many of the locals decide they've suffered the last straw. A cadre of militants storm trooping through the local mosque during prayer even prompts the otherwise peacekeeping and largely silent Imam (played with restrained anger by Adel Mahmoud Cherif) to protest by attempting to reason with the rabidly dogmatic loyalists. His words fall on deaf ears, much to his chagrin.

"The women are the ones who truly resist," Sissako affirmed. "The men do nothing to fight back. In fact, they acquiesce!" We see a scene, early in the film, where a woman fishmonger refuses to cover her hands with gloves as ordered by the jihad military. She defiantly thrusts our her hands, telling them she would rather they cut them off than have to wear their gloves in the sweltering heat. She's then led off to prison.

A young woman, sentenced to forty lashes in public for defying the ban on music sings as her tears flow from each tortuous blow. The scene is movingly portrayed by Malian singer, actress and composer Fatoumata Diawara. One is reminded of the scene in Steve McQueen's Oscar-winning "12 Years A Slave," in which the female protagnonist is almost whipped to death. Similarly, the scene is hard to watch and makes you flinch. By contrast, a man ordered to take off his long Western-styled pants, storms off, ripping them off in frustration. He is obviously agitated, but acquiesces, even in the throes of outrage.

All of the actors in the film are locals or amateurs gleaned from the local population. The most engaging is Toya, the daughter of the local herdsman Kidane (Ibrahim Ahmed) and his wife Satima (Toulou Kiki), who refuse to leave their traditional tent on the outskirts of town, even though all of their neighbors have long fled the encroaching jihadist invasion. There's the precious 12 year old daughter Toya, played by amateur actress Layla Walter Mohamed (more on her presently) and finally, the fourth member of the family, Issa (played with disarming charm and heart-tugging innocence by Mehdi AG Mohamed), an orphaned boy who tends the Kidane's small herd of eight cattle.