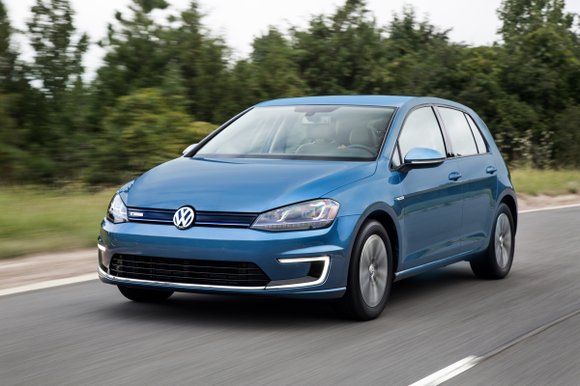 We came here to get a look at Volkswagen’s offerings for the 2015 model year. Normally, during these full-line previews there are a few tweaks here and some burnishing there. But VW did have a triad of new stuff that will help its presence in the U.S. market.

The German automaker has come a long way from the days when its calling card in this market was the Beetle. There are 11 different Volkswagen models. Add trim lines and that number multiplies, which we didn’t do, to scores of vehicles which are derived from the Beetle, the Beetle Convertible, the CC, the e-Golf, the Golf, the Golf GTI, the Jetta, the Passat, the Tiguan and the Touareg

The model that will probably get the most coverage is the fully electric version of the new Volkswagen Golf that was introduced earlier this year. Briefly, the e-Golf’s electric motor develops the equivalent of 115 horsepower and 199 pound-feet of torque. It has a range of 70 to 90 miles.

On an all too short test drive, we found the e-Golf to be extremely quiet. The only thing we could hear was just a bit of wind noise over the roof. The car accelerated smartly, handled well and it was pretty nimble in the heavy traffic that engulfs suburban Washington, D.C. The quick judgment is that this car can handle routine short haul driving without a hitch.

The e-Golf comes with a road side assistance plan that is meant to reduce what Volkswagen called range anxiety. Using a fast charger, the lithium-ion battery can be charged to 80 percent capacity in a half hour and its distinguishing design cue is that it has LED headlights as well as LED daytime running lights.

The e-Golf goes on sale in November; the base price will be $36,265. Presumably, Volkswagen does not expect to sell a bunch of e-Golfs but to get to the next level of battery technology the automaker and its peers have got to get real world experience in electric cars, especially battery technology and charging stations. And the e-Golf is Volkswagen’s effort.

However, the automaker’s best-selling model, the Jetta, gets a new diesel engine that will be used in other VW diesel models. The Volkswagen Group sells more diesel powered vehicles in the U.S. than any automaker.

The new clean burning diesel is a 2.0-liter TDI that makes 150 horsepower and 236 pound-feet of torque at 1,750 rpm. When mated to a six-speed manual transmission, the 2015 TDI Jetta gets 31 mpg in the city and 46 mpg on the highway. With an automatic gearbox, city mileage remains the same while highway mileage falls one mile per gallon to 45.

The Jetta also gets a new 1.8-liter turbocharged four-cylinder that makes 170 horsepower and 184 pound-feet of torque. Surprisingly, with either the six-speed manual or the six-speed automatic transmission fuel consumption for the 1.8-liter remains the same: 25 mpg in the city and 37 mpg on the highway. The new Jetta can be equipped with Bi-Xenon headlights and LED daytime running lights. The Hybrid, the 2.0-liter and the 2.0-liter turbo remain.

Four engine choices with multiple gear boxes that range from manuals to dual clutch transmissions to plain old automatic transmission and multiple trim lines result in base pricing for the Jetta that starts at $17,035 for the 2.0-liter base Jetta with a five-speed manual transmission to $32,490 for the 2015 Volkswagen Jetta Hybrid SEL Premium.

The third significant change and perhaps best of all is that the electrical layout of 2015 Volkswagens has been changed so that beginning next year the vehicles will be equipped with USB jacks. No matter the model, the name of the game in the future is connectivity and without USB jacks Volkswagen was at a distinct disadvantage, especially with younger customers.

Now, the automaker from Wolfsburg has really entered the 21st century.