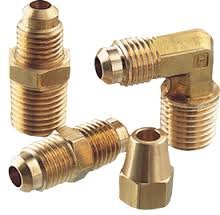 Joliet police are seeking two men alleged to have stolen $50,000 in brass connections from a Joliet business and attempted to sell them at a New Lenox recycling business, Deputy Chief Edgar Gregory said.

The suspects are alleged to have broken into a storage trailer at Quality Crane Services, 288 Alessio Drive, and made off with the fittings sometime over the weekend, Gregory said. The theft was discovered at about 4 p.m. Sunday.

Joliet police alerted metal resellers to be on the lookout for anyone wanting to sell the connections, and All-American Recycling on New Lenox Road contacted them Monday about two men who were attempting to find a buyer for fittings that matched the description, Gregory said.

Employees were unsuccessful in detaining the men at the business, but did get a license plate number to the 2007 Kia they were driving, he said. The man who owns the car said his son and friend had been using it at the time the suspects were at the recycling business, he said.

Police are hoping to pick them men up on probable cause and make an arrest, Gregory said.