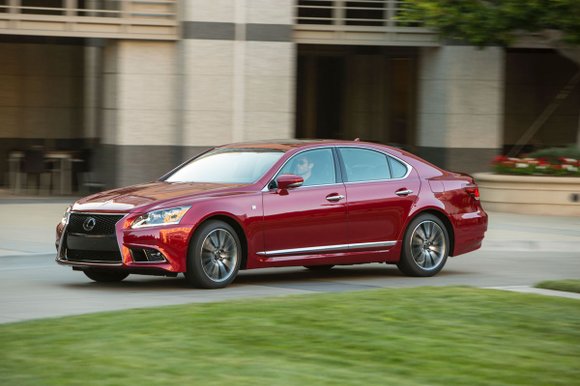 Lexus has turned the corner. That might sound strange since the Japanese brand has been amongst the best-selling luxury brands for years. But that was because of its utility vehicles, which accounted for more than half its sales.

Although Lexus sedans are quality built vehicles, renowned for their smooth quiet rides and a dealer network that is second to none in terms of customer satisfaction, the automaker’s cars were, well; boring. Not anymore.

Lexus has energized its designers and they have come up with an aggressive face called the spindle grille for all Lexus vehicles and they have redesigned the interior of all their cars, dumping the center stack in the process.

To put some verve into the brand they’ve also added an F Sport trim line. And that’s what we got to test drive, the 2014 Lexus LS 460 F Sport. It was an intriguing full-size sedan.

The Lexus flagship was powered by a direct fuel injected 4.8-liter V8 that made 386 horsepower and 367 pound-feet of torque. Mated to an eight speed automatic transmission, the car was as smooth and quiet as any Lexus we’ve ever test driven. But it was also fun to drive, and that characteristic is new to the full-size Lexus sedan.

What added the fun to the Lexus LS 460 was the F Sport Package as Lexus called it. The appearance package included 19-inch split 10 spoke alloy wheels, a sport tuned and lowered adaptive variable air suspension, stabilizer bars and shock absorbers, Brembo brakes with six-piston calipers in the front and 14.8-inch ventilated limited slip rear differential in the rear.

Coupled with the air suspension, the LS 460 F Sport had five ride settings that ranged from Eco, Normal and Sport to Comfort and Sport +. Select one of these settings and the air suspension would stiffen dampening appropriately and the steering ratio would change. We spent most of the time in Sport +.

The car was quick; we had the rear-wheel-drive LS 460 F Sport and it could get from a standstill to 60 mph in a fairly swift 5.4 seconds. And it was reasonably maneuverable. Our test vehicle had a turning radius of 36 ft. It was nimble too. Lane changes on the expressways here were snappy and the car could step away from traffic with just a touch on the gas pedal.

Inside, the interior had an F Sport motif. The heated and cooled front seats were bolstered, comfortable, perforated with white inside the holes (don’t ask us how they did it) and they were black leather as was the rest of the interior. The steering wheel and the front headrests were embossed with the F Sport emblem but it was in black and hard to see on the headrests. The rear seat headrest should have been embossed too but they weren’t.

There was a black Alcantara headliner, aluminum pedals, paddle shifters and the F Sport motif continued on the exterior with front and lower bumper inserts and there were LED fog lights.