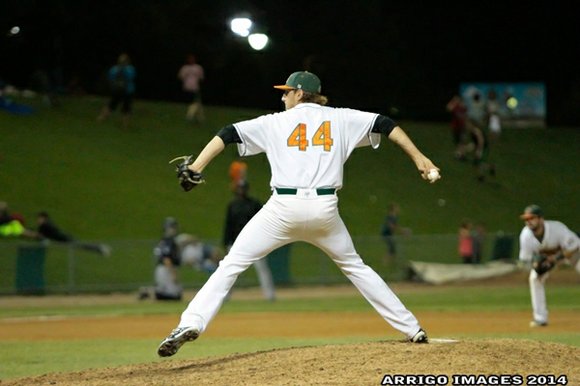 The Joliet Slammers provided this account of the team's final game of the season Thursday:

The Joliet Slammers-Presented by ATI Physical Therapy-lost to Gateway 9-8 in 15 innings and almost five hours on Thursday to end the 2014 season.

Gateway scored in the top of the 1st inning against Andrew Busby on a Madison Beaird RBI single for a 1-0 lead. Seth Granger ripped a solo homer for Joliet in the bottom of the 1st to tie the game at 1-1. Beaird did it again in the 3rd inning as his single gave them back a 2-1 lead. TJ Bennett added a 2-run single and the Grizzlies lead moved to 4-1. That knocked Busby out of the game and Bobby Hillier came on with two men on base and nobody out but retired the next three hitters without another run scoring.

The Slammers comeback started again with a Grant DeBruin RBI single in the bottom of the 3rd and an RBI base hit for Max Casper in the 4th to make it 4-3. The Grizzlies struck again with a pair of runs in the top of the 5th. Richard Seigel hit a sacrifice fly and then a run-scoring double from Jimmy Obermark pushed the Gateway lead to 6-3. Tyler Thicke came on the get the final out of the 5th for Joliet.

A Tommy Richards single in the 7th gave Gateway a 7-3 lead. Joliet rallied yet again with a total of four runs combined in the 8th and 9th innings to force extra innings for the 15th time this season. A wild pitch and an RBI grounder from JD Dorgan in the 8th inning made the score 7-5. A wild pitch and a two-out RBI single from Russell Moldenhauer tied the game at 7-7 in the 9th.

First baseman Adam Giacalone pitched two innings late in the game for the Slammers and in the 10th, after an error TJ Bennett singled to give the Grizzlies an 8-7 lead. In the bottom of the inning Seth Granger’s two-out single tied the game at 8-8.

Neither team scored in the 11th as David Kubiak came on to pitch for the Slammers. He went into his 5th inning of work in the game before he allowed an RBI single to Bennett to end his streak 19 straight scoreless innings of work. Kevin McNorton then came on to pitch with Joliet trailing 9-8 in the 15th inning. Pitcher Matt Costello pinch hit in the bottom of the 15th and singled. The Slammers use 20 players in the contest. They failed to score in the 15th and fell 9-8 in 15 innings to end the season.

In the middle of the 8th inning, the Slammers gave away $500 to lucky fan, Wally Cera, as part of their Amazing August/September promotion. The higher each night's attendance, the higher the payout was for the promotion. The payout on Aug. 1 to a lucky winner was $5,000.