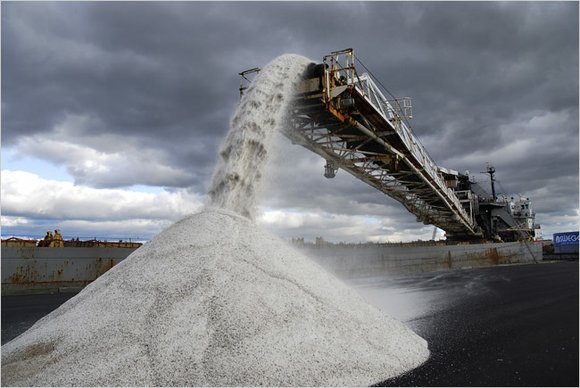 Plainfield and Shorewood will be paying a lot more for road salt this year because the state of Illinois dropped its group purchasing program, affecting more than 180 government bodies.

The villages of Plainfield and Shorewood haven’t been taking winter planning with a grain of salt.

A snafu with a state bid program made sure of that.

Both municipalities found out in late July that they would be unable to get salt through a previous arrangement with the state, which included about 180 other government bodies.

The dissolution of the bulk buying program meant the municipalities would have to find their own bids and in most cases would be paying almost double the rates of previous years.

Shorewood trustees approved a second purchase Tuesday night of another 1,000 tons of salt for $107,200 from Midwest Salt of Batavia. The board approved an initial 1,000 ton purchase in August for $92,000 from a different supplier.

The village paid about $57 per ton for salt last year.

After last year’s record cold and snow fall, the village used about 3,000 tons of salt and was left with about 600 tons on hand before the most recent purchases.

“This is the best salt price we were able to find,” Shorewood Public Works Director Chris Drey said.

Over in Plainfield, the village has about 1,500 tons of salt in storage and typically uses about 4,500 in the course of the winter.

After having survived the previous harsh winter, Plainfield was also looking to restock their supplies.

Waste water superintendent Doug Kissel said the village had submitted its order in March to the state but was not notified of the lack of bids from the purchase program until July 18.

The state resubmitted the bid but later notified municipalities in a letter on Aug. 21 that they were on their own. During that time, prices for the salt were continuing to climb, Village Administrator Brian Murphy said.

It's possible a consortium of government agencies will bid as a group next year through the Will County Governmental League in order to secure discounts for buying in larger quantities, Murphy said.

With more local control over the bid process, Murphy said the village would be able to secure pricing earlier, perhaps as early as May or June.

The village has plans to stretch its salt supply by mixing it with sand, and using beet juice and calcium chloride, should the need arise.

“We do have a pretty good plan ’b’ if we get a worse winter,” Murphy said.