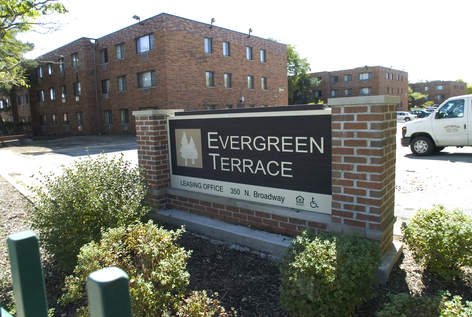 Joliet may become the new owner of the public housing complex known as Evergreen Terrace.

Last week’s decision regarding the condemnation lawsuit against the owners of the complex on Broadway Street may be the beginning of the next phase in the long standing Joliet lawsuit. The owners of Evergreen Terrace intend to appeal the decision to a higher court, according to Jake Paschen, President of Burnham Cos., manager of the complex for the owners.

Norgle’s decision was emphatic that conditions at Evergreen Terrace I and II had not been eradicated even after a $5 million renovation in 2012 and thereafter. Norgle also deemed security of the property is a problem.

That does raise the question that if conditions were as described how could the owners of Evergreen Terrace I and II continue to receive rental payment subsidies from HUD? Housing quality standards are set by HUD.

They provide that in order for an owner to receive a rental subsidy payment for public housing there are 13 performance criteria that must be adhered to. They include safety, security and sanitary condition standards. Failure to provide the standards can result in a possible loss of payments and possibly the housing contract with HUD. The City of Joliet also inspects the property periodically.

Paschen also responded to my question regarding security issues. A private security firm has personnel on duty primarily during the day. Nighttime security is primarily provided by on-duty Joliet police. Joliet is reimbursed for their services by Evergreen Terrace management. Joliet police provide approximately 35 percent of security at the complex.

Mayor Tom Giarrante was asked about city inspections. He said violations were cited and were corrected on a timely basis. There has been no denial of occupancy as a result of any city inspections. Giarrante reasoned that many of the problems the City of Joliet has regarding Evergreen Terrace are a result of “high density on the property.”

The city has prevailed in this round of the legal process and is set to argue the next step which is the price for the complex. The appeal could delay the process of fixing a price for the property by as much as a year or longer, according to legal advisors with experience in condemnation lawsuits. Now what?

Questions remain. The City does not know how much the property will cost. There is no plan of action to determine whether the complex will stay intact, be completely demolished, or something in between. The resources to pay for the property and any rehabilitation costs have yet to be identified. Most importantly where are the residents of Evergreen Terrace going to be living one, two or even five years from now?

No victory lap should be taken yet. It’s as if the city won the lottery, but no plan exists for winning and there is no money available for the payoff.

According to a recent report almost half of the city’s 8,460 fire hydrants have been tested. Approximately 3 percent are out of service and another 6 percent are in need of repair. The report contemplates all except about 10 percent of the hydrants will be tested the remainder of this year. That 10 percent will be completed in 2015.

When the hydrant issue came up in April of this year, only 3,000 hydrants had been tested the previous three years. According to City Manager Jim Hock, all hydrants in the future will be tested every two years. Stay tuned…