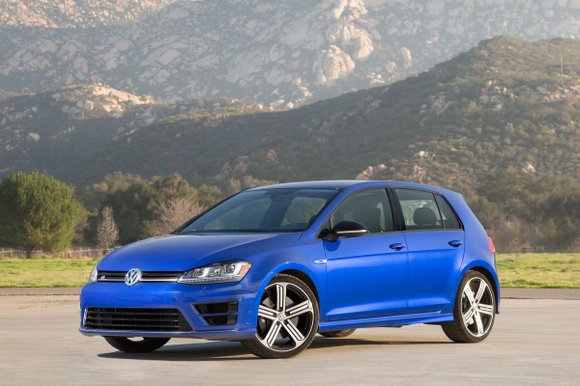 The high powered low volume 2015 Volkswagen Golf R could play a big role in getting the German automaker’s U.S. sales back on the good foot. That would be more VWs rolling out of showroom doors.

Here’s the deal: the VW Golf recently was named car of the year by two very prestigious organizations. Now the Volkswagen Golf R helps to fill out a lineup that includes the regular Golf, a performance version of that compact car, a diesel powered Golf and an electric Golf. A station wagon is on the way but we came here to test drive the Golf R. It is the high powered version of this car.

By the numbers this Golf R had a 2.0 liter turbocharged four-cylinder engine under the hood that made 292 horsepower and 280 pound-feet of torque. It was mated to a direct sequential gearing, read six speed dual clutch, automatic transmission branded (DSG). This version goes on sale in this spring. It will be joined by a six-speed manual Golf R this summer that will be sold as a 2016 model; it will cost about $1,000 less than the automatic.

With the fast shifting DSG, the Golf R can get to 60 mph from a standing start in a blistering 4.9 seconds and it has a top track speed of 155 mph. Because of low sales for the two-door Golf R in the past, the 2015 version will only be sold in this market as a four-door. Mileage is expected to be 23 mpg in the city, more than 30 mpg on the highway and 26 mpg combined.

The car had the 5th generation permanent 4Motion but don’t let semantics fool you. The Golf R is front-wheel-drive, the back wheels, using sensors, gained instant torque before the front wheels slipped. That could be often as the torque band hits its peak from 1,800 rpms to 5,500 rpms.

The Golf R had huge vented disc brakes: 13.4 inches in the front and 12.2 inches in the rear. It was 0.8 inches lower than a regular Golf and the ESC (electronic stability control) could be switched off.

However, that is something that should be done on flat smooth surfaces like race tracks and not on tight twisting two lane country roads that climbed to more than 4,000 ft. in altitude as we headed to Julian, California, about 100 miles northwest of here.

The 2015 Golf R’s exhaust note was formidable as the push button start engine came to life. The quad exhaust had what my driving partner called turbo blip with the change of every gear. The tight turns and switch backs reminded us that four-wheel-drive is good on dry pavement too as the Golf R planted on the road and stayed in its track. When we approached turns too fast, its big brakes slowed us down without a lot of fuss, removing anxiety in the process.

You’ve got to know your Volkswagen Golfs in order to distinguish the Golf R. The exterior package included subtly different bumpers with larger air intakes, side skirts, and a rear diffuser. The quad adaptive Xenon headlights had LED daytime running lights forming a square U under each, the side view mirror caps were painted black and it had a modified grille with the “R” logo embedded. But the easiest way to differentiate it was to get a look in the rear, which most vehicles on the road did as we sped away, and glimpse the four chrome-tipped exhaust pipes and the “R” badge on the liftgate. The five exterior colors were Tornado Red, Limestone Grey Metallic, Deep Black Pearl Effect and Oryx White and Lapiz Blue Metallic.