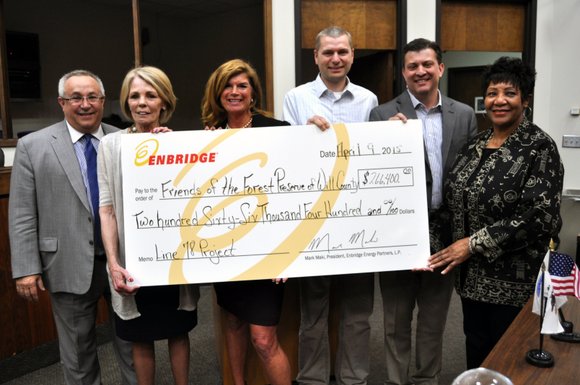 The Will County Forest Preserve District provided this news release:

The donation will be used to purchase trees, tree and shrub groupings and seeds for a restoration project at the District’s 790-acre Forked Creek Preserve, which is located in Florence and Wesley townships and a portion of Wilmington. The project will restore a 24-acre wooded corridor and a complementary 18-acre buffer site, which will benefit bats, migratory birds and other wildlife species for years to come.

The check, which is the largest donation to the District’s Foundation to date, was accepted by Foundation Board Chairwoman Ann Dralle. Forest Preserve Board of Commissioners President Suzanne Hart thanked Enbridge for voluntarily mitigating the impact of the Superior, Wis.-based company’s new Line 78 crude oil pipeline that will run from Pontiac to Griffith, Ind.

Scott Clark, Enbridge’s Line 78 project director, said the company always searches for ways to mitigate its pipeline projects and it has donated $50 million to communities where it does business over the past decade.

“As we come through (areas), we leave them either the same or better than we found them,” he said. “We really strive to give back to the local communities.”

John Gauderman, director of Enbridge’s Chicago region operations, said the company’s partnership with the District and its Foundation “provides us another opportunity to demonstrate our ongoing commitment to the communities where we operate and the environment,” he said.

Past donations from Enbridge have been used by the Forest Preserve District to purchase signs for Isle a la Cache Museum, Centennial and Veterans Memorial trails, and land restoration and tree planting at O’Hara Woods.