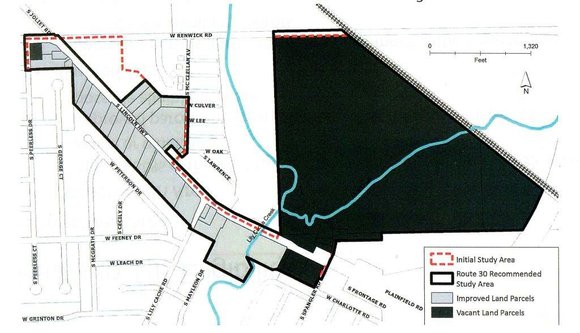 The map shows the proposed area of the U.S. TIF district that's expected to be in place by June.

The Plainfield Village Board endorsed plans Monday to establish a TIF district on U.S. 30, between Renwick and Spangler roads.

Rules governing the creation of a TIF, also known as tax increment financing district, require properties to meet certain conditions in order to be eligible, including land that is economically stagnant, blighted or would otherwise not attract private investment.

A study done by SB Friedman, a Chicago-based development firm, found that properties along the stretch of U.S. 30 met the criteria for a split district encompassing a “conservation area” TIF and a “blighted area” TIF.

Once created, tax rates remain constant within the TIF district for as long as 23 years. However, during that time, any increases in property value and the resulting difference from the tax revenue increase is paid by the property owner and goes into a TIF fund to be reinvested in improvements in the area.

The study found the area met several TIF-qualifying criteria, which included 50 percent of the buildings in the study area are 35 years or older with equalized assessed values that decreased for the past six years.

About 52 percent of parcels also show deteriorating conditions and 83 percent were found to be lacking adequate utility access and storm water retention.

The TIF district will include The Boulevard retail property, a 150-acre parcel that includes a former truck stop at the junction of U.S. 30 and the entrance to Interstate 55. The area was to be a retail/residential development before the downturn in the economy in 2008.

Under the terms of the deal with SB Friedman, the village paid $26,100 for the TIF study and will pay another $52,100 for a redevelopment strategy for the corridor.

Fran Lefor Rood, a representative with SB Friedman, told trustees that four parcels are being targeted for redevelopment concept plans: A corner lot at U.S. 30 and Renwick; the site of a current car dealership; the former U.S. 30 Plex site; and land on Spangler Road, across from The Boulevard development.

Concept plans for those parcels could include new grocery store sites, mixed retail and restaurant uses, and retail and office uses.

Lefor Rood said the site near Spangler could draw interest from business owners looking to lure customers from the traffic generated by future development at the Boulevard shopping district.

Trustee Jim Racich said critics may question why the village is spending money on the study or going through the process to create the TIF district.

“Planning is essential to good growth,” he said, noting that the “static” economic growth the village has seen won’t last forever.

“We have to be ready for when the development comes."

The village board will proceed with the TIF designation process in May, when it will also finalize the boundary for the district. The approval process is expected to take place in June through August.