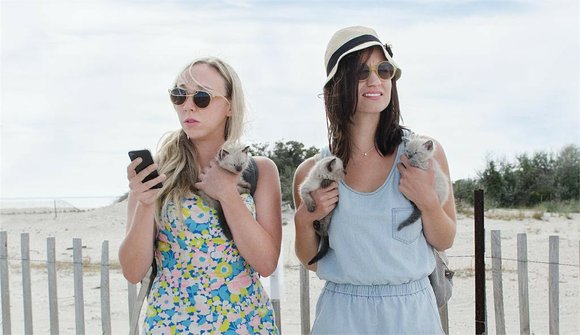 NEW YORK---Thursday, August 13th marks the New York Premiere of a film that has already garnered the Gand Jury Prize at the 2014 South by Southwest Film Festival and critical raves from the likes of Variety, The Hollywood Reporter and The Huffington Post. "Fort Tilden" is the first feature film outing for writer/directors Sarah-Violet Bliss and Charles Rogers. In spite of their novice stature, they've hit it out of the park with a film that strikes just the right note between satire and wry observation. The film charts the meanderings of Harper and Allie, a pair of Williamsburg twenty-somethings, trying to make something out of the loose ends of their life, but who aren't quite sure of what they really want.

Allie is grappling with her decision to join the Peace Corp in Liberia after becoming a college dropout. Harper still clings to her dream of being an artist while reluctantly receiving checks from her globe-trotting father whose more absorbed in his own life than giving even fleeting credence to his daughter's emotional upheavals, as she copes with her day-to-day anxieties.

The film centers around the girl's desire to have at least one carefree day at the beach with a couple of guys with whom they share a passing sexual fancy. What starts out as a carefree day of recreational drugs and beer at an abandoned beach, Fort Tilden, turns out to be a seemingly endless journey, fraught with pitfalls and unexpected twists and turns that are symbolic of the turmoil in their own lives. For every disappointment or setback, there's a dose of self-discovery, that at least gives some meaning to their meandering journey.

The two start out on a pair of bikes, one loaned, reluctantly, by an upstairs neighbor, which eventually wind up either abandoned or stolen. Their misfortune lands them in an ill-fated cab ride with an Indian-born driver who takes exception to Harper's father's employ at a company he deems as exploiting his homeland.

The girls finally make it to their beach rendezvous, only to find out that instead of having the carefree afternoon they were promised, they're once again forced to confront their inner demons and life's outward disappointments.

Starring Bridey Elliott as Harper, the daughter of Saturday Night Live alum Chris Elliott and Clare McNulty as Allie, who has worked in San Francisco and New York with Cutting Ball Theatre Company and the NYU Graduate Film Program and Columbia's School of Theatre Arts, the two maintain a refreshingly candid rapport throughout the film that veers between mutual contempt and acceptance, sarcasm and empathy and a healthy dose of self-criticism. It's especially delightful how the writers weave in the important role that social media plays in the lives of their young protagonists.

Allie, for example, is called out by her Peace Corp mentor for lying about canceling an appointment due to illness after Harper posts an Instagram photo of her at the beach. Harper, meanwhile, maintains a running dialogue with her father, which reflects their contentious relationship, via her Smartphone. Fort Tilden reveals all of the paper-cut wounds of post-adolescence and fledgling adulthood in a iight-hearted fashion, that reveals their character's foibles and vulnerabilities in a way that makes them endearing and irresistible. "Fort Tilden" a hard film not to like!