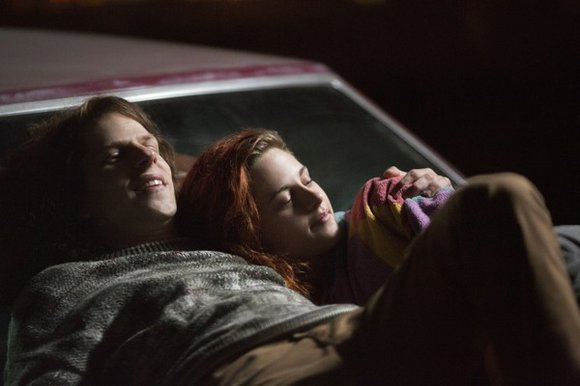 At first blush, Mike Howell (Jesse Eisenberg) looks like your prototypical slacker with not much of a future. The small town stoner is very content to fritter away his life behind the counter of the local convenience store, so long as he can go home and get high with his girlfriend, Phoebe (Kristen Stewart), after work every day.

It's hard to figure out why she puts up with the loser, between his lack of ambition and a crippling fear of flying that prevents them from venturing very far from landlocked Lymon, West Virginia. After all, she's attractive and has a decent career as a bail bondsman. Nevertheless, she sticks with him, even after he has a panic attack in the airport and screws up their plans for the perfect Hawaiian getaway. Mike was as upset as Phoebe when he failed to muster up the courage to get on board, since he'd purchased a diamond ring with which to pop the question during the vacation.

But Phoebe has no idea that her beau has a hidden past as a sleeper agent trained as a deadly assassin by a U.S. government spy agency. Trouble is, Mike's been blissfully unaware of it, too, since a of his brain was turned off when the Ultra program was put in proverbial mothballs.

However, the cozy couple is in for the shock of their lives soon after Adrian Yates (Topher Grace) targets Mike for death. The callous bureaucrat dispatches killers to Lymon to eliminate the remote risk of the dormant asset somehow activating and going rogue. Mike surprises himself when the hit men arrive to take him out.

He suddenly displays an array of prodigious fighting and survival skills implanted deep in his subconscious, and slays his attackers almost effortlessly. Yates nevertheless remains determined to complete the mission, gradually upping the ante as Mike manages to vanquish each escalating wave after wave of adversaries.

Thus unfolds American Ultra, an endlessly-entertaining action comedy directed by Nima Nourizadeh (Project X). This remarkably-novel adventure is reminiscent of Kick-Ass (2010) in the way it alternates effortlessly back-and-forth between lighthearted and graphic fare.

The movie also devotes considerable attention to generating a palpable chemistry between co-stars Jesse Eisenberg and Kristen Stewart, thereby ensuring we care about the fate of their characters once the plot thickens. Alternately sophisticated and silly, but ever unpredictable thanks to a few cleverly-concealed twists, American Ultra is a delightful summer sleeper not to be missed.