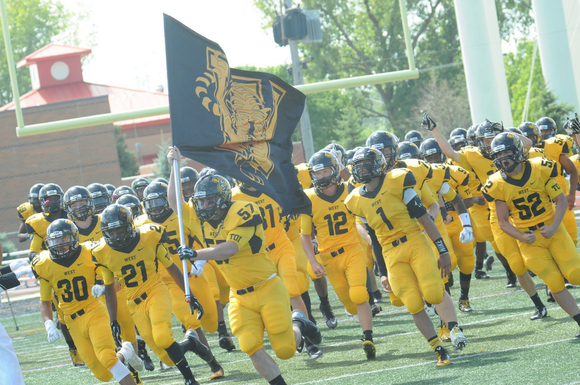 Joliet West's first night game of the season is Sept. 11, but anyone who wants to attend will need to purchase tickets in advance.

The 2014 Friday night football experiment was enough of a success last year that Joliet Central and Joliet West both have more games to their schedules this year.

"There were absolutely no problems last year, which is why we increased to two games (for each school this year)," Joliet Township District 204 spokeswoman Kristine Schlismann said.

But just as they were last year, the sale of tickets will be tightly controlled, with no one allowed to buy them the night of the games and students required to print and sign their names on the back before being admitted.

The district banned Friday night games in 2008, after having trouble with fighting, drinking and other crowd problems.

Last year it was reintroduced on a trial basis, with each school being allowed to play one home game on a Friday night.

In conjunction with that, the district made some physical changes to enhance security, including additional parking lot lighting and perimeter fencing at Central and more parking lot and stadium lighting and fence repairs at West, Schlismann said.

"At both campuses, security, dean and police presence was increased," she said.

Tickets for Central's first Friday night game, which they'll play at 6:30 Sept. 4 against Rich South at Central High School Football Stadium, will be sold to the public at the school, 201 S. Jefferson St., at the following times. Season pass holders and students with activity stickers will not be charged for their tickets, but they must also pick them up during these same times:

Anyone who wants to attend the game must purchase and pick up tickets at the Joliet West Athletic Office, 401 N. Larkin Ave., during the times listed below. Season pass holders and students with activity stickers will not be charged for their tickets, but they must also pick them up during these same times:

No pick-up times or locations have been announced for the other Friday night games, which for West will be Oct. 16 against Stagg High School and for Central will be Oct. 2 against Carl Sandburg High School.

Two concessions have been made in acknowledgment of problems that have occurred in the past. One is that only the varsity teams play; there are no sophomore games. The other is that games start at 6:30 p.m., rather than the tradition 7 p.m. start time that most other high schools schedule.

However, even though the number of games has been doubled this year, the district is not loosening the safeguards to ensure that they have some control over those who attend. Among the restrictions are:

Admission is $4 for adults and $2 for children (anyone age 8 or younger must be accompanied by an adult) and for students with an ID who do not have an activity sticker.