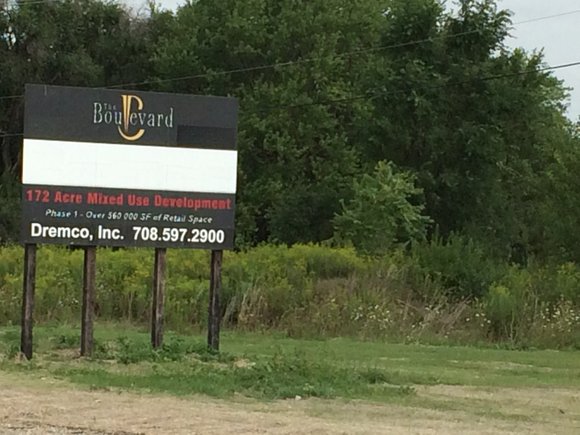 A developer once envisioned The Boulevard "lifestyle center" for land at U.S. 30 and Interstate 55, which is now being annexed into the village of Plainfield.

Plainfield will annex 160 acres near the intersection of U.S. 30 and Interstate 55, including land once was proposed for The Boulevard "lifestyle mall," the Plainfield Village Board voted Monday.

The board authorized its attorney to draft an annexation agreement for the unincorporated property, although there is no project or development announced for the site.

A similar deal had been approved in 2007 for the 74 acres of the site that were to be developed as as The Boulevard, encompassing the area south of Mink Creek, but the deal fell through with the start of the 2008 recession.

The site includes what's left of a former truck stop, which was closed when the land was bought for the mall. Village officials see that area as an "entrance way" into Plainfield that's key to redeveloping the U.S. 30 corridor, which is currently undergoing road widening and upgrade work by the Illinois Department of Transportation.

The village is having a TIF district feasibility study done on the corridor as well as a redevelopment plan.

Trustee Bill Lamb noted the property once was planned for a mix of residential and commercial use but village Planner Michael Garrigan said the updated use hasn’t yet been identified. It's possible the land could now be best used as a mix of light industrial and residential, Garrigan said.

“The future zoning of that property north of Mink Creek has not been identified,” he said.

Once the 160 acres is developed, it will include access off Renwick Road, he added.

Trustee Jim Racich said that whatever the final use of the property, the developer needs to take the “ecologically sensitive” aspects of the land into consideration, including the nearby Lilly Cache Creek.

Brock A. Stein can be reached at Brock@TheTimesWeekly.com.